Further, as fluoropolymer films find various applications in medical devices, manufacturers are developing innovative technologies to further surge the sales. For instance, surgical equipment made from fluoropolymer films are resistant from the sterilization process.

Fluoropolymer films are finding increased application in consumer goods as well. For instance, the increasing demand for cook and bakeware along with the growing population in emerging countries is one of the key factors surging the demand for fluoropolymer films.

Fluoropolymers exhibit superior physical and chemical characteristics. Good non-stick performance, chemical resistance, optical transparency and moisture resistance provide an edge to fluoropolymers over other resins. Fluoropolymers maintain high strength over a wide temperature range and their thermal and electrical properties further facilitate the work performance of end-products. Attributing to these unique properties and capabilities of fluoropolymer films, they are increasingly being used in various diversified and sophisticated industries such as electronic, machine, automobile and semiconductor.

Superior Properties of Fluoropolymers, leading to their Increased Utilization in Various Applications, are expected to drive Revenue Growth of the Global Fluoropolymer Films Market

Fluoropolymer films are typically produced by cast film extrusion. The process offers significant challenges, and special attention is required right from the designing of the die till the film with desired characteristics is produced. Fluoropolymers, being highly corrosive in nature, require corrosion resistant material to properly handle the melt product during processing. Also, at low shear stress values, the tendency of fluoropolymer films to develop melt fracture increases, which critically affects the surface and optical properties of the films. Moreover, the high prices of these films, as a result of the high raw material and processing costs, are expected to affect their market growth over the coming years.

Reduction in Processing Cost and Development of High-Grade Fluoropolymer Films

The fluoropolymer films market is price competitive. The companies supported by backward integration, i.e. who also manufacture the resin, hold the vantage point in terms of more flexibility in end product prices and discounts. To capitalize on the increasing demand from different end-use industries, companies are focusing on reducing the overall processing cost without compromising on the product quality, which can provide significant growth opportunities for film manufacturers across the globe.

Further, in response to the increasing demand for solar energy, the number of solar cell and module manufacturers has been expanding significantly across the globe. Devising an attractive marketing plan targeting these customers and making long-term contracts with them can also provide significant growth opportunities to the suppliers of fluoropolymer films.

On the basis of product type, the fluoropolymer films market has been segmented into PTFE (Polytetrafluoroethylene), FEP (Fluorinated Ethylene Propylene), PFA (Perfluoroalkoxy Alkane), PVA (Polyvinyl Fluoride), PVDF (Polyvinylidene Fluoride), ETFE (Ethylene tetrafluoroethylene) and others, which include ECTFE, PCTFE, etc. The PTFE segment is projected to account for a major share of the global fluoropolymer films market throughout the forecast period.

Growth of the PTFE segment is estimated to remain high over the forecast period, accounting for approximately one-third of the total market share in terms of volume. Expanding at a healthy growth rate, the PVF segment is expected to create significant growth opportunities in the coming years.

The PTFE segment, in value terms, is anticipated to expand at a CAGR of 6.7% over the forecast period and reach a market value of about US$ 687.7 Mn by the end of 2026. The demand for PTFE and PVF is expected to remain high across different regions. On the other hand, the PVDF segment is estimated to exhibit a steady growth rate through the forecast period. The ETFE segment, expanding at a CAGR of 5.5%, is expected to represent a 4.2% revenue share in the overall fluoropolymer films market by 2026 end.

Chemical, mechanical engineering, electronics and automotive industries are among the key end users of fluoropolymers films in Europe. Fluoropolymers offer good insulating properties and low attenuation of high frequencies as compared to other insulating materials, which is one of the key factors driving the fluoropolymer films market.

PTFE (polytetrafluoroethylene): Expanding at a CAGR of 6.7% over the forecast period, the segment is anticipated to create an incremental $ opportunity of US$ 329.2 Mn by 2026 end.

Others: The others segment (ECTFE, PCTFE, etc.) is projected to create an incremental $ opportunity of US$ 44 Mn during the forecast period. 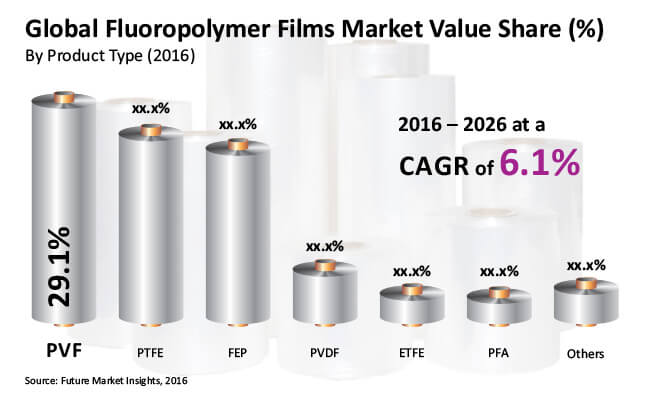 Detailed profiles of the providers are also included in the scope of the report to evaluate their long-term and short-term strategies, key offerings and recent developments in the global fluoropolymer films market. Some of the key players reported in this study on the global fluoropolymer films market include The Chemours Company, Arkema Group, Solvay sa, DAIKIN INDUSTRIES Ltd., Asahi Glass Co., Ltd., 3M Company, Saint Gobain S.A., Polyflon Technology Ltd., Dongyue Group Ltd, and Honeywell International Inc. Manufacturers are introducing new applications of fluoropolymer films; however, limited availability of resources, global digitization and climatic changes are some of the key challenges associated with the market growth.

To understand and assess opportunities in the global fluoropolymer films market, we have divided the report into three sections:

Fluoropolymer Films Market by End Use