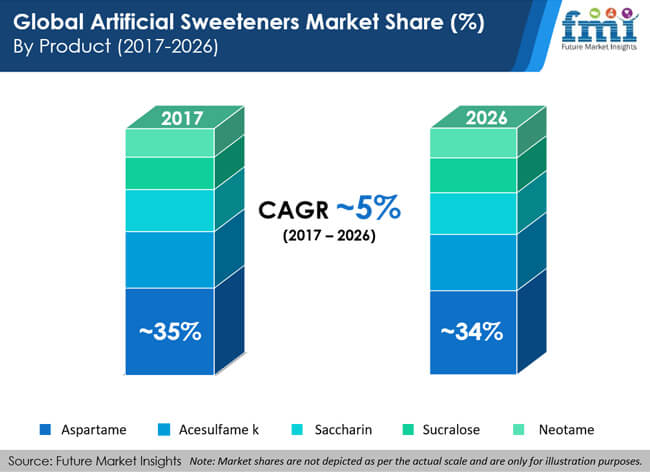 In 2016, the incidence of obesity among adults in the U.S. was nearly 40%, according to the CDC. This means that more than 93 million adults were living with obesity. Consumers with obesity suffer from high levels of diabetes, cholesterol, blood pressure, and risk of heart diseases. Management of obesity requires strict dietary changes. More than 30 million people in the U.S., accounting for an astonishing 9.4% of the country‘s population, had diabetes in 2015, according to the National Diabetes Statistics Report, published in 2019 by Centers for Disease Control and Prevention.

Type 2 diabetes is the most common form. Health-conscious consumers prefer sugar-free, fat-free, and gluten-free products as a preventive measure against these diseases. Additionally, rise in consumption of artificial sweeteners by diabetes-inflicted consumers is anticipated to boost demand for artificial sweeteners.

Consumers hold a great deal of admiration and respect for actors, sports players, and famous individuals from various fields. These celebrities endorse various artificial sweetener brands. As a result, individuals easily trust these brands and are persuaded to buy these products. This imitation of influential personalities largely drives sales and bolsters artificial sweeteners market revenue.

Sucralose is a commonly used artificial sweetener in the pharmaceutical industry. Liquid and chewable medications that are usually very unpleasant in taste are made easier to ingest with the addition of sucralose. Sucralose is affordable, does not leave an aftertaste, and can act as a preservative and antioxidant while it enhancing viscosity of liquid medications. As a result, sucralose is expected to grow rapidly in the product type segment with a CAGR of ~6% in the forecast period (2017-2026).

Consumers’ awareness about the negative health effects of consuming sugar remains the linchpin of the regional market for artificial sweeteners, in both developing and developed economies. Yet, with a mounting number of consumers, especially the young population, making healthier food choices than ever, the demand for artificial sweeteners is significantly high in the Asia Pacific region excluding Japan (APEJ).

The region accounts for more than one-fourth revenue share of the global market, and will continue to create profitable sales opportunities for artificial sweetener manufacturers in the coming years.

However, ambiguities about the carcinogenic properties of aspartame may impact its demand in the coming years, which is likely to triggering market players to resort to newer ingredients of artificial sweeteners.

However, their applications in baked goods and confectionery products are expected to encourage manufacturers to diversify their product range to suit the changing end user demands. By 2026, the consumption of artificial sweeteners in beverages and bakery goods are expected to hold equal revenue share of the global market.

The global artificial sweeteners market is segmented in detail to cover every aspect of the market and present complete market intelligence to readers.