One of the latest trends witnessed in the global sweetener market is the rise in the production of organic sweeteners. Companies operating in the sweetener market are diversifying their product portfolio by reading the consumers’ sentiments about organic honey, organic sugar, stevia, and more. Such products are found to be reducing blood-sugar levels. In addition, several studies have found that stevia has a high degree of digestive tolerance with low carbohydrate content. Such a blend of health without compromising on the taste of sugar could bring prodigious prospects for the sweetener market growth.

Besides organic sweeteners, there is a huge market for artificial sweeteners. For instance, sucralose and aspartame are common additives utilised for sweetening a wide range of food and beverage products. Such products, similar to natural and organic sweeteners, hold zero calories, which makes it popular as an additive for people watching their weight. However, long-term usage of artificial sweetener might lead to diabetes, cancer, and similar health issues.

A major factor hampering revenue growth of the global sweetener market is the stringent regulatory norms regarding the use of artificial sweeteners as a food ingredient. This is due to side effects such as allergic reactions, improper functioning of the digestive system and other health-related issues. Although cultivation and consumption of novel sweeteners such as stevia are increasing at a rapid pace, various end-use industries such as confectionery, bakery and others are witnessing a slow adoption of sweeteners as a food ingredient. This is due to limited regulatory approvals by various legislator bodies keeping in mind the health concerns of consumers across the globe.

Investments by key players in low-calorie sweeteners, cost optimisation and process standardisation are the new trends in the global sweetener market

The novel sweetener and artificial sweetener market have few buyers and sellers in the global market, and hence companies are focussing on cost optimisation in order to increase productivity and market share. Moreover, manufacturing non-sugar and low-calorie sweeteners involves a standard extraction process. Companies in the global sweetener market have patent extraction processes for the same. This is further supported by stringent government regulations due to health issues.

Increasing investments by companies coupled with geographical expansion by market players has led to high competitiveness in the global sweetener market report. In addition to this, increased brand awareness of products dealing with specific issues such as obesity curtailment, nutritive advantages and health benefits is expected to drive demand for artificial sweeteners and novel sweeteners specifically stevia extracts in the near future.

The sweet spreads segment is the fastest growing sub-segment and is expected to be valued at close to US$ 12 Bn in 2017 and will reach a market valuation of about US$ 14 Bn by 2027 end. This is attributed to increasing demand for sweet spreads and its increasing popularity among consumers. 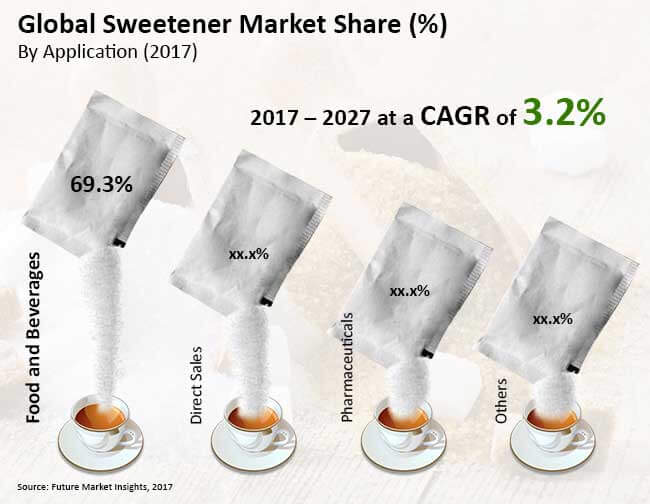 Owing to increasing exports and manufacturing of food and beverage products, the related segment is expected to expand at a high CAGR in North America

By the end of 2027, the food and beverages segment in the North America sweetener market is projected to reach more than US$ 18 Bn, expanding at a CAGR of 3.0% over the forecast period and revenue is expected to increase 1.3x by 2027 end as compared to 2017. The food and beverages segment is estimated to account for a little more than 70% value share in the North America sweetener market size by 2017 end and is expected to show little growth in the value share by 2027 over 2017.