According to the report by Future Market Insights, rising cases of ischemic stroke and diabetes has fueled the demand for hyperbaric oxygen therapy devices across the globe. According to data published by World Health Organization, around 422 Million people suffering from diabetes. Also, 1.6 million people die due to diabetes related diseases states to the study.

Introduction of portable hyperbaric oxygen therapy devices and increasing awareness in medical space regarding importance and utility of multiplace HBOT will drive the market growth.

As per the research conducted by Indian Journal of Anesthesia hyperbaric oxygen therapy devices can be used as a supportive treatment during pandemic as it provides effective oxygenation in COVID-19 patients.

In the future, the market is anticipated to grow significantly, as healthcare workers are switching towards hyperbaric oxygen therapy devices for treating soft tissue necrosis. Asia Pacific region are likely to yield highly opportunistic prospects, contributing towards the overall expansion of the market.

How Is Rising Prevalence Of Ischemic Stroke Driving Market?

According to Federal Ministry of Education and Research, around 200,000 people suffer their first stroke every year in Germany. The study also states that ischemic stroke is the most common form caused by blood clot blocking the circulation of blood to the brain.

Rising prevalence of obesity and diabetes is propelling the stroke cases, thereby accelerating product demand. With elevated efficacy and multi-functionality of hyperbaric oxygen therapy devices, a steady market growth is expected during the forecast period.

Rising demand for non invasive and drug free treatment among the customers and integration of hyperbaric oxygen therapy devices with imaging technology like CT and Magnetic Resonance Imaging (MRI) for studying brain ischemia and early detection of acute ischemic stroke will positively influence the market expansion.

Continuous research and development regarding the hyperbaric oxygen therapy preconditioning after the ischemic stroke will create novel market growth opportunities in the upcoming years.

According to Mayo Clinic Organization, although the hyperbaric oxygen therapy is generally safe, there are some risks associated with the procedure. It also states that lung collapse is possible due to change in air pressure.

How is The Hyperbaric Oxygen Therapy Device Market expanding in the U.S?

The hyperbaric oxygen therapy devices market in the U.S. is expected to flourish during the forecast period due to growing prevalence of necrotizing soft tissue infections, diabetes and cancer across the country.

As per the data from Center of Disease Control and Prevention (CDC), the mortality rate due to necrotizing soft tissue infections vary from 24% to 34%. Necrotizing soft tissue infections (NSTIs) coupled with streptococcal toxic shock syndrome (STSS) elevates the mortality rate to 60%. Procedure for removal of infected tissue and muscle or amputation of body parts is undertaken depending upon the severity of infection.

The rising incidence of necrotizing soft tissue infections will fuel the demand for faster and efficient hyperbaric oxygen therapy devices.

Increasing government and private research showcasing the high effectiveness of hyperbaric oxygen therapy in elevating the survival rate and limb salvation will heighten the market demand during the forecast period.

Why Is Demand for Hyperbaric Oxygen Therapy Devices Surging In Russia?

According to the World Health Organization, nearly 21.1% of women aged 15 to 49 are suffering from severe anemia in Russia. Rapid advancement in the healthcare system in Russia along with growing government initiative towards awareness will boost the hyperbaric oxygen therapy devices market in Russia during the forecast period.

Increasing awareness regarding the negative effects of anemia on human body will fuel the demand of hyperbaric oxygen therapy devices. Increased healthcare spending habit showcased by consumer will further fuel the market demand.

According to International Diabetes Federation, as of 2019 around 8.28 million people are suffering from diabetes in Russia. Diabetes is one of the leading causes of non healing wounds like diabetic foot ulcer.

How Lucrative Is The Growth Opportunity In China?

According to a report published by National Institute of Health, every year around 10 million individuals suffer from burn in China. Report also states that burn is the fourth most common cause of injury in the world. Booming petroleum and chemical industry will increase the chances of burn injuries.

According to World Health Organization, around 4.5 million new cases of cancer were detected in 2020. Surge in cancer patients elevates the demand for radiation therapy. However radiation therapy has major side effects leading to delayed radiation injury.

What Is Driving Adoption Of Hyperbaric Oxygen Therapy Devices In India?

According to a report published by Journal of Diabetic Foot Complications (JDFC) around 15% of diabetic patients are susceptible to foot ulceration in their lifetime. According to International Diabetes Federation, as of 2020, around 77 million people are suffering from diabetes in India. These numbers indicate huge market growth potential in India.

Growing government initiatives to provide better healthcare facilities and spreading awareness especially in rural population will be key factor driving the market growth. As per World Health Organization, in 2020, 1.32 million new cases of cancer were registered in India.

Radiation therapy is an effective method to shrink the cancerous tumor. Side effects of high radiation exposure lead to delayed radiation injury and soft tissue necrosis. High cancer prevalence and increasing demand for radiation therapy coupled with development in medical and healthcare centers will propel the market growth. 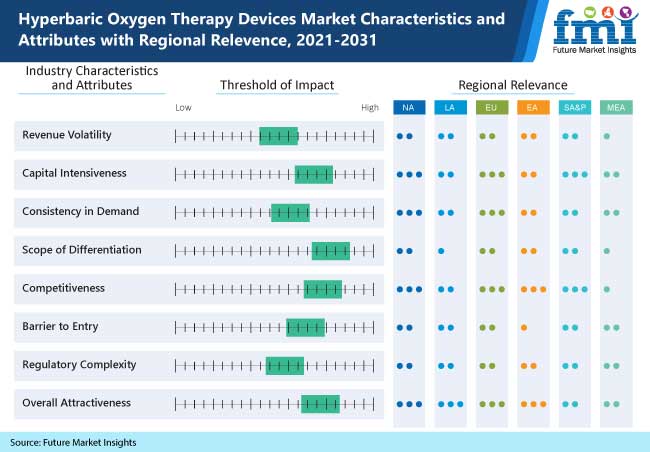 Which is the Top Selling Hyperbaric Oxygen Therapy Devices Type?

As the cases of acute and chronic wounds continue to rise, market players are looking to reduce cost of the product in order to make it available in remote corners of the world.

It is also efficient in treating gas embolism by providing pure oxygen at 3 times the normal atmospheric pressure to improve circulation. High oxygen pressure shrinks the gas bubble leading to easy passage through the system.

Organic strategies include new product development and extensive research and development for product portfolio expansion. They are also working towards launching modern and cheaper medical devices to penetrate the new markets and capture maximum market share especially in emerging economies.

Some market players are employing strategic merger and acquisition and forming an alliance with regional distributors to strengthen their supply chain channels. They are also emphasizing towards faster product approvals, product development and patenting.

Future Market Insights has also analyzed the following players in the hyperbaric oxygen therapy devices market in its detailed report: