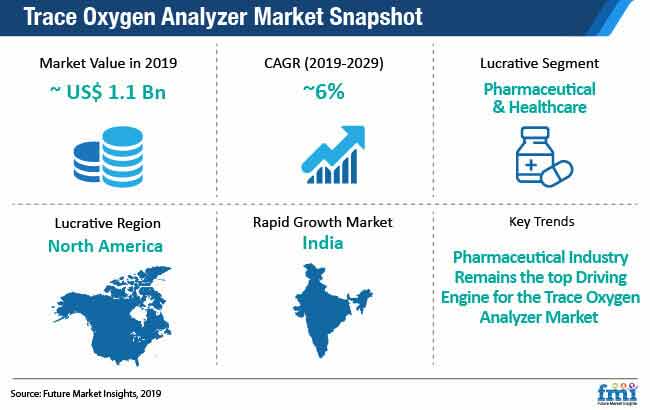 For instance, In January 2019, Barben Analytical, a unit of AMETEK Thermal Process Management launched oxygen analyzer (OXYvisor), which can measure the trace oxygen in the gas and liquid phase. These factors are boosting the growth of trace oxygen analyzers. 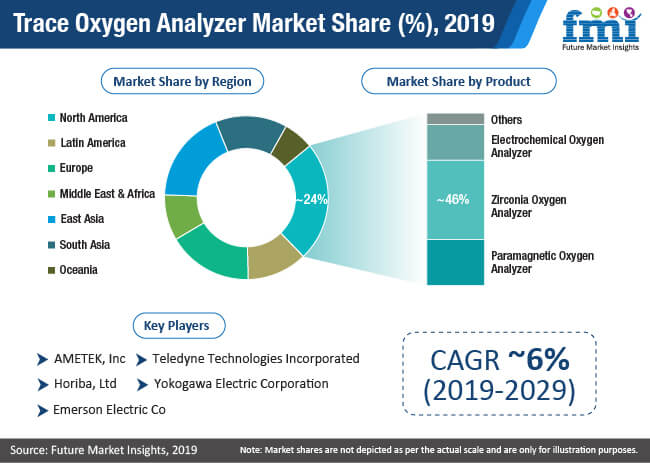 In recent years, the demand for trace oxygen analyzers has surged at a fleeting pace, in the view of growing adoption in multiple industries including, pharmaceutical & healthcare, electronics, chemical & petrochemical, and food & beverage, among others. Trace oxygen analyzers are primarily used for efficient industrial process control, environment monitoring, and processing of natural gas and petrochemicals.

In the current scenario, the healthcare and pharmaceutical sectors are flourishing worldwide which has directly impacted the demand for advanced trace oxygen analyzers. Further, growing applications of oxygen monitoring in other end-use industries including, power generation and food transportation are expected to boost the growth of the global trace oxygen analyzer market in the foreseeable future

Some of the other advantages of zirconia oxygen analyzers such as, speedy response rate, efficient detection in low oxygen conditions, and alarm notification if the oxygen levels drop below the required levels have also contributed towards their growing demand across a number of end-use industries. As demand for zirconia oxygen analyzers continues to move in an upward trajectory, the global trace analyzer market is expected to grow at robust rate in the coming years.

Zirconia oxygen analyzers are widely used by gas producers to measure the impurity levels of oxygen and end-users of gas to ensure the quality of the gas used for the production of chemicals. Manufacturers involved in the global trace oxygen analyzer market are making continuous efforts to enhance the capabilities and specifications of products by adopting new technologies such as luminescence-based sensing.

The presence of a developed healthcare industry in nations including the US and Canada has created several lucrative prospects for the market players. Further, active market players based in North America and South Asia are expected to increase research expenditure to provide future-proof trace oxygen analyzers for an array of applications

Further, several players are leaning towards expanding their production capacity to eliminate bottlenecks that exist in the production-supply cycle. In addition, product promotion by branding is a trend that is likely to continue as prominent names in the trace oxygen market are using the aforementioned tactic to tap the unexplored potential.

For instance, Emerson Electric Company formulated promotional strategies for their analytical and measurement instruments with the brand name “Rosemount” to enhance their brand’s visibility in accord with the different sectors.

The existing and upcoming market players are likely to lean towards the production of eco-friendly trace oxygen analyzers by enhancing design and assessment standards. Further, the growth of the trace oxygen analyzer market is expected to hinge on the demand from the booming food packaging and power generation industries in the coming years.

With stringent regulations in place concerning the quality of perishable food products, the use of trace oxygen analyzers is gaining pace, in order to ensure that oxygen in packages containing controlled atmosphere is at optimum level. Further, the growing adoption of zirconia and portable trace oxygen analyzers in various end-use industries including, power generation, chemicals & pharmaceuticals, and more are expected to shape the future growth of the trace oxygen analyzer market.