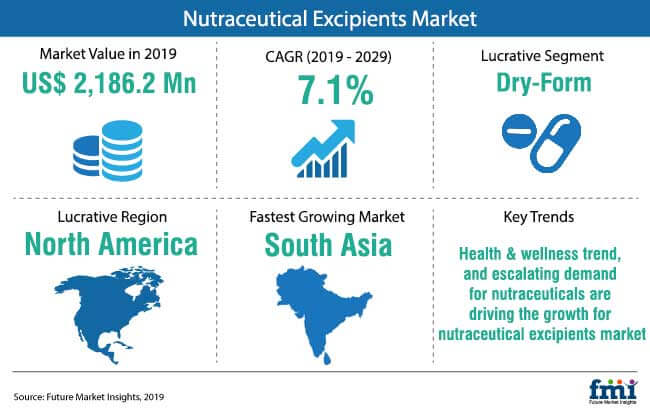 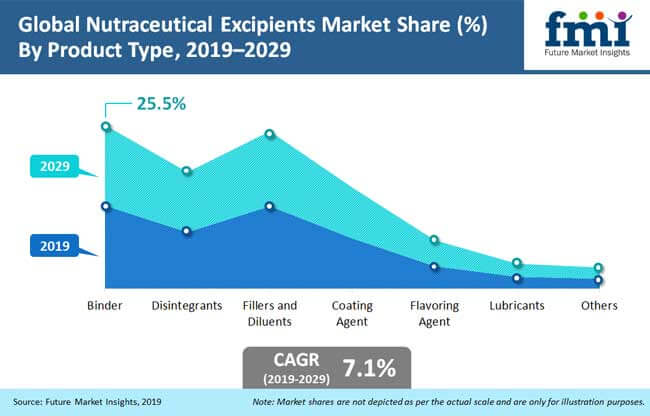 Incessantly increasing prevalence of lifestyle diseases is triggering consumers to become more conscious about their dietary habits and nutritional intake. Consumers are weighing their dietary choices with the attitude influenced by preventive healthcare to mitigate the negative health impacts of fast-paced lifestyle. With preventive healthcare becoming the need of the hour as the percentage of geriatric population of the world surges, the demand for nutraceutical excipients will surge to gain improved health outcomes.

Increasing incidences of lifestyle diseases are catalyzing the ongoing R&D activities in the nutraceutical excipients landscape. Business operations will continue to be influenced by growing demand for multi-functional nutraceutical excipients. Existing excipients available in the market are being revised and cross-linked to improve their prevailing characteristics while minimizing the production costs to a significant extent.

Manufacturers are expected to bank on the recent advancements in excipient technologies to enhance the adaptability of multifunctional nutraceutical excipients in diverse end-uses and applications.

The demand for nutraceutical excipients is witnessing an uptick in the United States, despite the incorporation of strict regulations and laws, such as Dietary Supplement Health and Education Act (DSHEA), on the sales of dietary supplements in the country. Increasing health awareness and dietary consciousness among consumers of all the age groups is the primary driving engine for the market in North America.

Though the product penetration remains significantly low in developing regions, such as Asia Pacific and Latin America, the market for nutraceutical excipients is expected to gain momentum in these region in the upcoming years.

What Does it Mean for Manufacturers?

As any nutritional or dietary supplement finds more stable form in solida state rather than in liquid state, thereby demand for dry nutraceutical excipients will continue to hold a significant share of the market revenue.

Market players are resorting to new manufacturing techniques for co-processing the existing dry nutraceutical excipients to cater to the increasing end-user demand and remain ahead of the curve in the coming years. Moreover, an exploration of solid-state properties of dry nutraceutical excipients and its impact on functionality will foster this trend in the upcoming years.