By the end of 2020, approximately 90% of the global population will have access to high speed internet. Image based bar code readers have undeniably gained greater prominence this year as the COVID-19 pandemic continues its relentless pursuit.

Countries such as China are showing resilience by using QR codes as a way to filter visitors at airports while Singapore is enabling better contact tracing by ensuring contactless entry of tourists.

With the high penetration of extremely sophisticated smart phones, QR codes and bar codes are being used as the next step for app based retail solutions. Presently, businesses are voraciously absorbing the might of image based barcodes as it serves as a lead magnet through aggressive marketing campaigns.

Retailers are coming out with resourceful strategies to use barcode readers for increased revenue and productivity. Conventional hand-held scanners were being used till now in grocery stores on back of their affordability, simplicity and low cost.

With technological advancements, smart phone apps are now being used as image based barcode readers and scanners. Most smart phones come with internet connectivity and high resolution cameras, thus making them fairly ubiquitous.

Not only this, but smart phones are also helping shoppers to scan product information such as descriptions, price and place. Self-adding of products into virtual shopping carts is helping eliminate long queues at store physical check-outs.

Retailers are also using this strategy to secure consumer related data which helps them in analyzing for more targeted marketing campaigns through the use of email marketing and newsletters. Desktop environments are also being used for warehouse management using desktop based webcams for barcode lookups

Automated robots having embedded devices that capture images, check product inventories, bad labeling and price discrepancies are becoming common place in very large retail spaces. The retail and commercial segment captured a value share of 33% in 2020 in the overall market and will continue to remain the largest segment through 2030.

The prevailing COVID-19 pandemic has raised concerns amidst the general public for coming into contact with surfaces that are potentially infected by the virus.

This has led to the institution of bar code readers through mobile phone apps that have contactless solutions for users. These new apps are now being used for contactless deliveries and payments.

2020 has been a good year for the image based barcode reading market with QR codes being used to make payments, avail concessions on products and gather information.

The latest smart phones this year are coming with sophisticated barcode readers that do not need a third party app. These include versions such as Android 9 and Apple 13.

Further, the market is seeing an astounding number of barcode scanner apps that are compatible with all Apple and Android phones. Scanning a bar code or a 2D image based QR code has never been easier. Here is our take on the latest apps that have been trending in the market:

The penetration of legacy smart phones in the market are allowing consumers to access varied content through barcode which is giving a boost to the overall market. 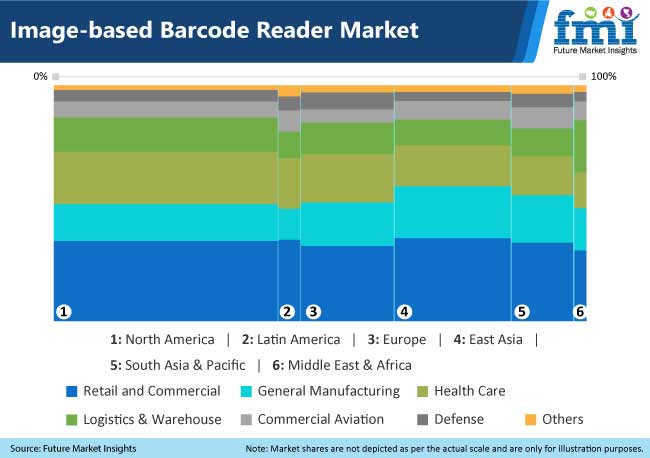 With retail being the largest segment in the overall segment, East Asian countries such as China and Japan are showing high growth within the retail and commerce space. The region is also seeing a high uptake of 2D image/barcode scanning. China will remain on top in terms of market value while the South Asian region is slated to witness an expansion of 2.4x during the forecast period.

The market is already well-established in countries such as US where they are being extensively used in retail for a seamless shopping experience. North America is also witness high influx of 2D image/code scanning which holds a leading share in the overall market. Well-timed digital wallet partnerships makes both Europe and North America high growth regions. Regionally North America is expected to be the largest market, anticipated to hold a value share of 28% by the end of 2030.

QR barcode reading is slowly and steadily carving a niche for itself in all categories of businesses. Big and small brands are capitalizing on this trend extensively giving an edge to consumer experiences.

With astute marketing campaigns, QR codes and bar code reading have proven to be a cutting-edge and game-changing technique that has led to successful amalgamation of both physical and digital worlds and have helped brands garner better virtual visibility and higher ROIs

Image Based Barcode Readers to Herald an Era of Experiential Shopping

Image based barcode and QR code reading will continue to trend over the next 4-5 years. This can be attributed to the following reasons:

With an estimated 11 million households in US scanning bar codes and QR codes from a meagre 9 million scans in 2018, the future for image based bar code reading and QR code reading looks effervescent.