They are comprehensively tested in order to ensure efficiency and safe working. Improvements in Transmission and Distribution network and growing electrification of railway lines are some of the main factors inducing the growth of the electrical testing services market in India.

The market is anticipated to ascend at a sound CAGR of 4.4% in terms of revenue over the forecast period of 2016 to 2026 chiefly influenced by the growth of the end users.

India is the third largest producer of steel in the world on the basis of volume and the only country to witness a positive growth in 2015 from 2014. As steel is usually produced in Electric Arc Reactors using electricity as the power source, growth in steel production calls for increased use of electrical equipment, which also will positively contribute to the growth of electrical testing services market in India.

From the perspective of community, India is the second highest populated country in the world with an estimated population of 1.33 billion by the end of 2015. Currently, proper distribution of electricity to each household in the country is done at a rapid pace with an estimation that 85% of the villages are already been electrified, and hence widening the transmission and distribution network significantly contribute to the growth of the market in India. Likewise, increased power generation in the power generating plants to accommodate the high demand of electricity will also drive the growth of electrical testing services market.

The railway department of India is moving towards complete conversion of electrical lines ensuring electricity as the main source of power to run the trains. At present, over 40% of the total railway lines of the country have been electrified and is likely to be completely electrified in the forthcoming years paving a way for the electrical testing services market to improve in terms of revenue generation.

The service type segment of the market comprises of transformer testing, circuit breaker testing, protection testing and battery testing. A transformer is an electrical apparatus primarily used for transmission of electric current by electromagnetic induction. The function of the transformer is to vary the voltage between two electric potentials or terminals.

The transformer testing segment dominates the Indian market with a market share of more than 40% closely followed by circuit breaker testing, which holds a market share of more than 30% in India electrical testing services market. In contrast, protection testing in the service type segment is likely to grow the fastest in the market with a CAGR of 5.1% owing to higher preference of the end users to frequently test the protective relays. 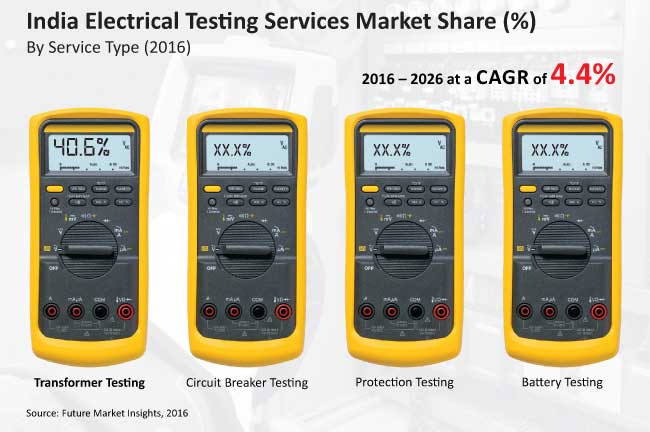 To understand and assess opportunities in the India Electrical Testing Services market, we have divided the report into two sections based on market segmentations as under