[197 Pages Report] The India alcohol market is predicted to record at a CAGR of 7.4%, amassing US$ 68 Bn by the end of 2026. Andhra Pradesh and Telangana have strengthened the market significantly, for these two states have the highest number of alcohol consumers in the country.

The Indian Made Foreign Liquor (IMFL) segment is anticipated to surpass the valuation of US$ 40 Bn, expanding at a CAGR of 5.2% in the ensuing forecast period.

The growing disposable income and the rising urban population are likely to boost the market during the forecast period. The increasing adoption of pub and cocktail culture in the urban areas have enhanced the demand for alcoholic beverages in the country, propelling the market.

The Indian Made Foreign Liquor (IMFL) segment was estimated to reach a market valuation in excess of INR 1,400 Bn by 2016 end. This reflected a Y-o-Y growth rate of close to 5% over 2015. This segment is estimated to be valued at more than INR 3,000 Bn by 2026, expanding at a CAGR of 5.2% over the forecast period. Indian Made Foreign Liquor segment in the India alcohol market is expected to create absolute INR opportunity of close to INR 80 Bn in 2017 over 2016.

Rapid increase in urban population is one of the key factors that is boosting the India alcohol market. Traditionally, brown spirits have been targeted at the urban consumer. As such, increasing urban population coupled with factors such as increasing disposable income and growing preference for whiskies is expected to create avenues for growth of the alcohol market in India.

Changing demographics is further expected to boost the India alcohol market. As of 2014, over half the country’s population (53%) was above the age of 25 years. Moreover, estimated median age of the country’s population for the same year was pegged at 27 years. The legal drinking age in India varies from state to state. For instance, 18 years in Goa, Uttar Pradesh and Karnataka; 21 years in Tamil Nadu and Andhra Pradesh; and 25 years in Maharashtra, Delhi and Punjab. 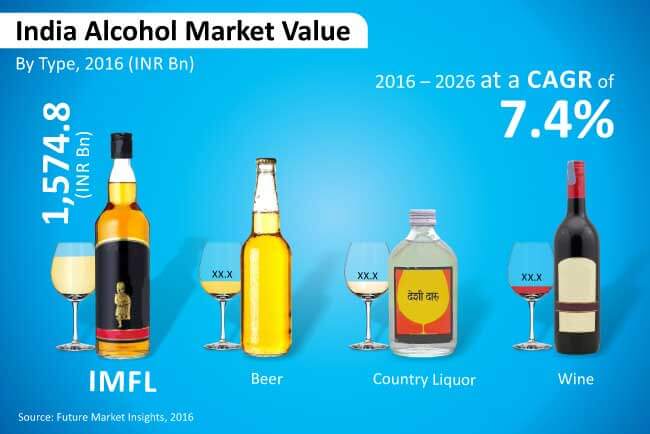 The aforementioned statistics indicate that India is an ideal market for high revenue growth of alcohol owing to increasing consumption among the people. According to World Bank statistics, GDP per capita income of the country for the year 2014 was pegged at more than US$ 1,595. The increase in per capita disposable income is expected to result in higher consumer spending on different lifestyle products and food and beverages, including alcohol.

This increase is expected to drive the growth of the alcohol market in the country. The Indian lifestyle, especially of the urban populace, has witnessed a radical change over the recent years. A change in outlook towards social consumption of alcohol, increasing alcohol consumption among women, growing prominence of “pub and cocktail culture” in urban cities and emergence of novel Food & Beverage formats has resulted in increasing demand for alcoholic beverages in the country.

All these factors are boosting the revenue growth of the India alcohol market and this growth trend is anticipated to continue throughout the forecast period.

The key segments covered in this report are:

What is the estimated value of the India Alcohol Market by 2026?

The India Alcohol Market is estimated to procure the market value of 5.1 trillion by the end of 2026.

Who are the prominent players of the Indian Alcohol Market?