Expansion of various end-use industries has been crucial for fuelling the demand demand for kaolin in India. According to FMI, the India kaolin market registered a CAGR of 3% during the historical period 2016 and 2019.

The sudden drop in the demand for kaolin in the year 2020 can be attributed to the restrictions imposed amid COVID-19 outbreak. With mines and various industries staying shuttered during the nationwide lockdown, the market registered negative growth. However, sales are expected to recover as the economy gradually returns to normalcy.

The growing demand for cement, concrete & ceramics from the construction and infrastructure industries owing to the growing construction of residential and commercial buildings, airports, bridges, highways and roadways and other parts is expected to boost the demand of kaolin in the coming years. This is due to the use of kaolin in the production of cement, ceramics and concrete.

The growing demand of paints and coatings in India is also anticipated to benefit the consumption rate of kaolin since kaolin is used to improve the rheological and mechanical properties of the paints. The strong presence of kaolin mines in the Kutch region, makes West India a popular destination for the Kaolin manufacturers to set up their processing plants.

What Is the Impact of Increasing Demand of Cement and Glass on Kaolin market?

The expansion of the cement industry in India will create impressive growth opportunities. Rising investment in building and construction sector of the country also will increase the demand of cement since it is used in the construction of roads, highways, airports, bridges and other infrastructure.

Kaolin is used as a raw material in cement production, therefore, rising demand for cement will have positive impact on the market.

Increasing production of glass due to the rising demand from automotive, construction, and renovation industries will have a positive impact on the market.  Flat glass is increasingly used in buildings, window panels, and vehicles. Kaolin is used in the production of glass and fiberglass, thus hinging its demand to a certain extent on the glass consumption.

Moreover, container glass is used for food packaging, pharmaceutical packaging and fiberglass lining in reactors, fiberglass insulation, fiberglass tanks, and pipes. This also is projected to create traction in the market.

What Is the Impact Of COVID-19 Crisis On Kaolin Market?

The Pandemic crisis has resulted in the restricted operations across the mineral industries in the year 2020. This is due to the closure of mining activities in India during the nationwide lockdown amid pandemic.

The kaolin market in India also has been affected by the COVID-19 crisis. The decrease in demand from various industries and shut down of various construction projects have resulted in the decrease in the consumption of kaolin.

The growth rate will therefore be affected due to less demand for kaolin from cement, ceramic, refractories, glass, paints and coatings, and other industries.

How is Demand from Cement Industry Contributing to Kaolin Sales in India?

Among end users, the cement Industry is anticipated to remain a key segment and is further estimated to account for about 47% of the overall kaolin consumption in India in 2021. Owing to the increasing application of cement in the construction and infrastructure sector, the demand of cement will consistently rise in the coming years.

The expansion of the construction sector in response to the rising investment in the construction of buildings, hospitals, bridges, airports, roadways, highways, and other structures will fuel demand for cement. This in turn will increase scope for kaolin application.

Why Has Crude Kaolin emerged as the Top-selling Product? 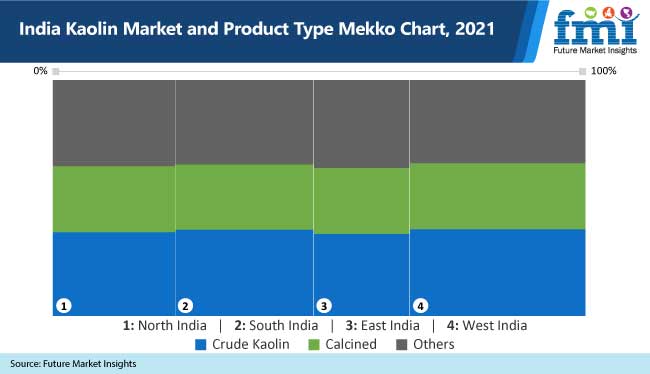 Companies operating in the Kaolin market of India are aiming to increase their production capacity and are focusing on increasing their mining capacity to expand their market presence.

Key market players are also focusing on strategic collaborations and partnerships with other players to increase their revenue and market presence.