Knee construction involves the repositioning of the anterior cruciate ligament (ACL) that acts as a stabilizing ligament that holds the tibia. During ACL tear, knee might give away while performing physical activity. Knee construction devices market is expected to witness significant growth during the assessment period 2017-2022.

Medical field is experiencing development. The advancements in technology have enhanced the knee construction surgery which can be performed with minimum incision with reduction in complications. As per market observations, knee pain owing to knee diseases like osteoarthritis can result in increased demand for knee reconstruction surgeries. Techniques with minimal invasion for knee reconstruction have improved the accuracy and precision which has resulted in reduction in surgery time.

Availability of improved tools for surgeries have addressed the rising demand for knee construction surgeries which in turn has impacted the global knee reconstruction devices market significantly. 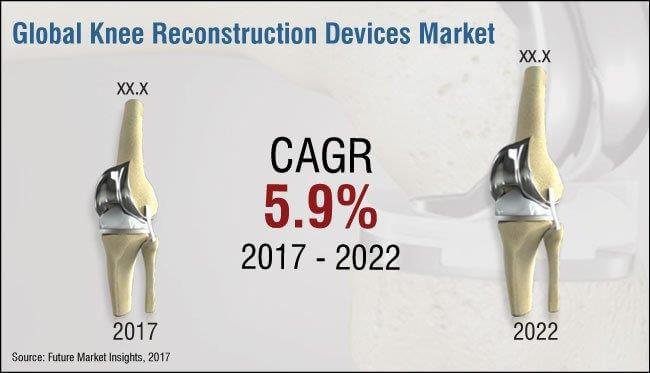 ACL (Anterior Cruciate Ligament) is a stabilizing ligament present within the knee and is one of the most important ligaments. It has a shape similar to a rope like structure which is situated at the knee center which runs from femur to tibia. Instability of knee is experienced in case of tear of this ligament as it does not heal. ACL or knee reconstruction is surgical procedure is performed which relocates the torn ligament back at the knee center. Devices such as partial implants, cementless implants, revision implants and cemented implants are used for knee reconstruction.

According to Future Market Insights’s research report on the global knee reconstruction devices market, the market is anticipated to reach a value of US$ 9.4 Bn by the end of 2022 growing at a high CAGR during the forecast period 2017-2022.

Tough Call to Make Between Partial Implants and Cementless Implants

In product type, cementless implants have comparatively high revenue share than that of partial implants as of 2017. However, partial implants are a shade better pertaining to growth factor. It becomes tough to justify any investment in these segments, by analyzing which of these segments has a potential future based on current fact that the cementless implants segment has a market share of 24.6% as of 2017.

This trend is poised to continue during the assessment period, as it reflects a 6.1% CAGR during the period. Asia-Pacific excluding Japan (APEJ) region also reflects high potential after North America growing at a significant growth rate.

By indication, the trauma segment shows high expansion rate and poised to reflect a significant 6.5% CAGR during the period 2017 to 2027. The osteoarthritis segment, however dominates the global market by indication in terms of revenue, as it held a market share of 47.8% as of 2017 and would grow in the years to follow. Followed by this segment, the rheumatoid arthritis segment comes second with respect to market share.