According to the FDA, hip implants are medical devices intended to restore and relieve mobility and relieve pain usually associated with arthritis and hip diseases or injuries. Currently there are five types of total hip replacement available with different bearing surfaces. Metal-on-Polyethylene – The ball is made of metal and the socket is made of polyethylene or has a plastic lining.

Growth of the global hips & knees reconstructive market is primarily driven by increasing awareness towards treatment in both developed and developing countries. Governments across the globe are taking collaborative initiatives to sustain the growing demand for hip & knee implants. For instance, in 2013, Medicare spent around US$ 7 Bn on hip and knee replacements. Moreover, an estimated 255 of the 400,000 such surgeries performed annually would become covered under the new payment model of CMS (Centers for Medicare & Medicaid Services) in the near future.

According to the World Bank, Asia Pacific and European countries are witnessing a spur in FDI. Developing regions such as India, Malaysia, Indonesia and Mexico have outstripped economic growth compared to developed regions. This, in turn, is expected to drive growth in investment across various healthcare sectors in these countries. This is anticiapted to boost revenue growth of the global hips & knees reconstructive market in the coming decade.

Based on fixation type, the global hips & knees reconstructive market is segmented into cement, cementless and hybrid fixations. In terms of revenue share, the cementless fixation segment dominated the global hips & knees reconstructive market in 2016 and is expected to continue its dominance throughout the forecast period, registering a CAGR of 6.4% in terms of value. Cementless fixation type is expected to account for a major share throughout the forecast period due to high penetration among the patient population. 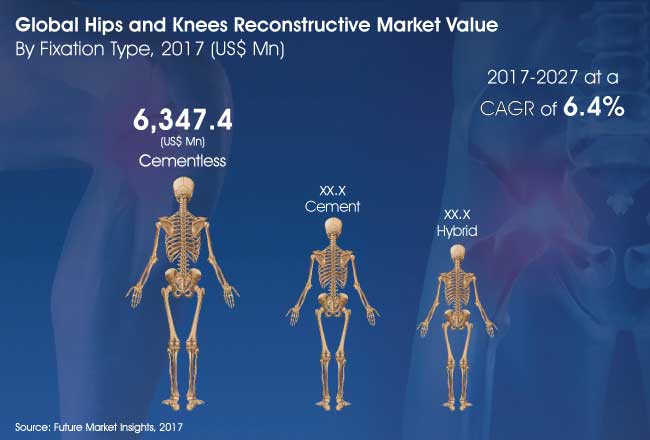