Various industries such as healthcare, pharmaceutical, and biotechnology are facing challenges in standardization of products and the exact composition amount of samples. Laboratory balances and scales are being rapidly adopted in laboratories to measure the mass of objects, which includes solids, liquids, and tissues. Monitoring the weight/mass of a sample is a crucial step while conducting an experiment, and it is most commonly checked again after the final step.

Among the different types of laboratory balances and scales available in the market, precision laboratory balances are expected to witness maximum growth during the forecast period, owing to high demand from industries such as healthcare, pharmaceuticals, biotechnology, and others. Due to stringent regulations related to drug development processes in the pharmaceutical industry, the monitoring of samples becomes a crucial step before and during experiments.

Other industries such as chemicals and food also have stringent regulations that need to be adhered to before a product can go to the market, which acts as a driving force for the adoption of precision laboratory balances and scales.

Nowadays, these precision laboratory balances and scales are installed with advanced software that ensure error-free weighing and also provide an option to transfer data to a personal computer or laptop. Many research professionals recommend these laboratory balances for the precise measurement of samples, which also includes medicines in pharmacies and for the analysis of various samples in pharmaceutical laboratories.

This is followed by China, with an approximate investment of US$ 475 billion in 2018. APEJ is expected to grow at a relatively high CAGR during the forecast period in the global laboratory balances and scales market, due to the presence of various key players in the region, as well as a large number of research laboratories present here. 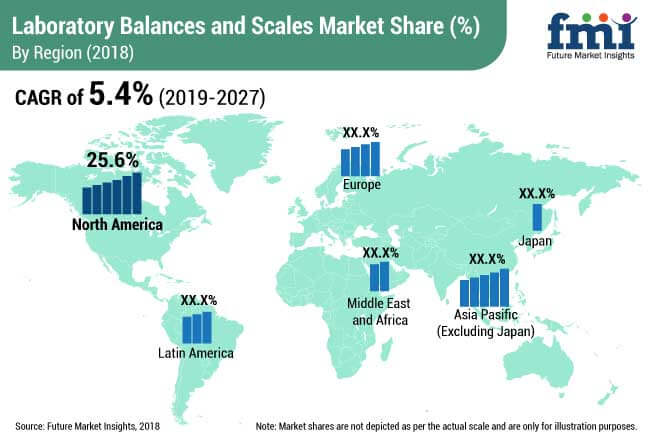 For instance, Mettler Toledo launched an analytical laboratory balance with a status light that indicate whether laboratory balances tests are up-to-date. It also includes features such as RFID technology and other relevant features for providing precise results.