An overview of the LED lights market

LED Lights, as considered under the scope of the report, have various applications across residential, office, industrial, shop/stores, hospitality, outdoor, and architectural work. Due to the benefits such as high energy efficiency, log life span, durability & flexibility and environment friendly features, LED Lights have been significantly used across government offices, hospitals, stadiums, malls, educational institutes, airports, railway, theatres, and several other areas.

LED Lights are energy efficient, and can save enormously on conventional fuels being used for lighting in underdeveloped countries. Infrastructural development throughout the world is demanding for more lighting solutions, and LED Lights are a perfect resolution to this. Furthermore, increasing demand for lighting fuel and growing awareness about the negative impact on health associated with using kerosene-based lighting products are few of the other major factors expected to drive demand for LED Lights.

Multiple retail giants nowadays are adopting LED Lights, with an intention to improve their customer experience, which is then driving the LED Lights market. LED Lights nowadays are not restricted only to the residential application, but these LED Lights are also being adopted in commercial application areas. Architectural LED Light manufacturers and providers are entering into strategic partnerships with online retailers in order to make architectural LED lighting products and solutions easily available to online users and expand their online visibility.

LED Lights are nowadays a preferred choice of lighting in residential sector, since they are energy efficient and saves on electricity consumption. Also, increasing adoption of architectural guidance for renovating homes is also driving the market for LED Lights in the Residential sector.

Furthermore, governments of several countries are promoting smart homes and smart cities concept, which inculcate the need for efficient lighting solutions such as LED Lights. Several supermarkets and hypermarkets in developed countries have adopted the LED Lights, in order to enhance their store aesthetics, and reduce the overall electricity expenses. Such developments in reference to the retail or shops/stores application are impacting the overall LED Lights market in a positive manner. 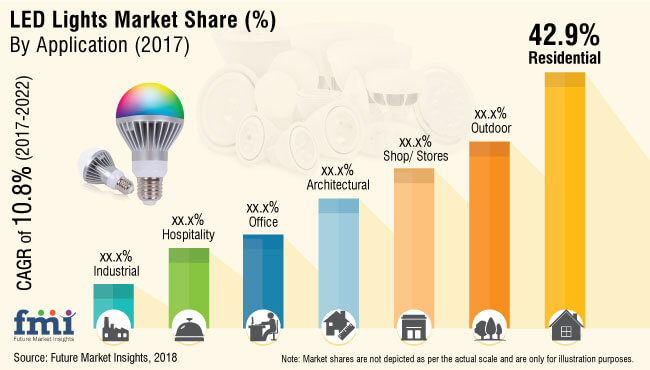 Europe is implementing LED Lights technologies in residential as well as architectural segments, and such a high adoption of LED Lights is most visible in countries including UK, France, Germany, and Italy. The sales of LED Lights in Western Europe market is projected to represent a total incremental opportunity of US$ 6,768.7 Mn, while the Japan LED Lights market is also expected to witness significant growth.

Owing to the advantages associated with LED Lights, and a demand for efficient lighting solutions, a high traction of LED Lights is expected during the forecast period, especially in developing countries such as India, China, etc. The APEJ region is expected to present attractive opportunities for LED Lights manufacturers in the forecast period, and is estimated to expand at a significant CAGR in terms of value.

Architectural lighting manufacturers and providers invest substantially in R&D initiatives to develop and introduce new and innovative architectural LED Lights, in order to enhance their product portfolio and to expand customer base.

Additionally, leading players in the market are in the process of upgrading their existing products in order to adhere to changing environmental and safety norms across the globe. LED Lights companies are shifting their focus towards professional lighting markets to capitalize the potential opportunities created by increase in government spending, especially in new public projects.

In October 2016, OSRAM GmbH acquired Novità Technologies, a U.S.-based manufacturer of electronic control systems for automotive lighting applications, to expand its specialty lighting business in the U.S market. The acquisition with reference to LED Lights is expected to assist OSRAM in meeting the increasing demand for LED modules and systems in the automobile industry.

GE utilized its LightGrid technology to develop customized LED Lights on streets with wireless lighting controls, through which San Diego saved US$ 250,000 annually. In January 2017, Lumileds Lighting launched an online Horticulture calculator for regulating LED Lights. In February 2017, Toshiba Lighting Tech Co., Ltd. Launched preliminary power supply built-in socket type lighting fixture, this LED Light is a type of emergency light, which can be used for the private housing service or ensuring security for guests at the time of any power failure.