Licorice Root Market: Growing Use as a Sweetener in the Food and Beverage Industry to Provide a Plethora of Opportunities to Vendors: Global Industry Analysis (2013 - 2017) & Opportunity Assessment (2018 - 2028)

Central Asia is facing a massive problem with its saline accumulated land. As licorice is a salt-tolerated shrub that contains sweetener as a core functional ingredient, the high salt content in the land is good for the sweetener ingredient that is found in licorice root. However, a major portion of the irrigation land in the region has been designated for the cultivation of cotton and wheat and other crops. The cost of production of these crops is comparatively high and switching production to licorice will help the farmers as well as crop producing companies in the region to gain profits from and also suffice the growing demand for licorice from several end-use industries.

As numerous farmers are at times even compelled to abandon this sort of land that has been dedicated for cotton and wheat owing to the high salinity, rehabilitating this land for harvesting licorice will present them with ample growth prospects. This will involve obtaining permission from the government to harvest licorice root instead of cotton, wheat, and other different staple crops. With the adoption of this strategy, it is being expected that this region will witness a proper production of licorice root in the coming years.

Licorice root extract is a very important flavouring agent and component at present in the confectionery and tobacco industries. Currently, it is being employed in the food industry as a flavouring agent and in the tobacco industry as a de-bittering agent in order to mask the off-note taste of stevia that has till now been a favourite in the market. Stevia has been a prominent sweetener in the tobacco as well as food industry till date.

However, researchers and food specialists are looking to incorporating licorice to mask the off-note taste of stevia. With the tobacco industry fast moving towards the development of sweet and flavoured tobacco, the demand for licorice is expected to rise in this industry over the coming years. 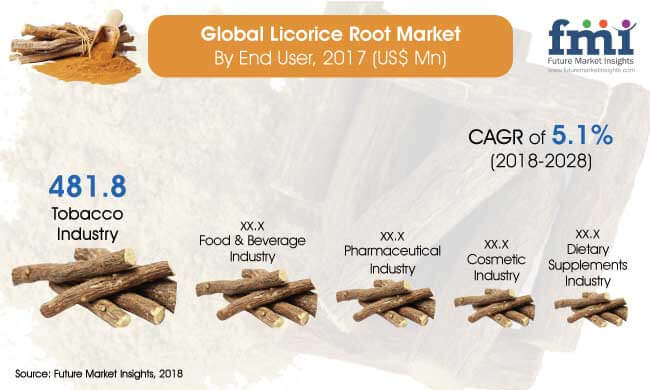 In order to meet the growing demand from the pharmaceutical and other vertical industries, manufacturers are collaborating with harvesters to maintain a stable production of licorice and prevent the prices from shooting up in the global market. This is expected to help boost the extent of cultivated land for licorice, eventually leading to a substantial growth in revenue of the global licorice root market.

The global licorice market has been segmented into: