The advancements in noninvasive technology of liquid biopsy diagnosis, which in turn reduce false positive and negative results in cancer detection is a key factor expected to propel the growth of the global Liquid Biopsy Market. Increasing demand for technically advanced liquid biopsy product, in various cancers, such as breast cancer, prostate cancer, lung cancer, colon cancer and other cancer diseases, for improved and accurate diagnosis is anticipated to drive the growth of Liquid Biopsy Market over the forecast period.

Noninvasive diagnosis methodology, minute biospecimens requirement and sophisticated procedures gaining the higher preference to liquid biopsy by the physicians over other conventional biopsy procedures. This increasing adoption in hospitals, diagnostic laboratories and research laboratories is expected to boost the growth of the future Liquid Biopsy Market. Extensive clinical research and R & D funding from government and industry is expected to propel the demand for liquid biopsy.

For Instance, according to the National Institute of Health (NIH), the federal government of U.S. allocated US$ 6.44 billion to National Cancer Institute (NCI) in 2020 fiscal year budget for cancer research and development in medical, technological and scientific development. Such rise in research funding will drive the growth of the Liquid Biopsy Market.

Strategic collaborations among liquid biopsy product manufacturer and end user, such as hospitals, diagnostics centers, cancer institute, and academic institutes are anticipated to drive growth of the Liquid Biopsy Market over forecast period in emerging regions such as Latin America and Southeast Asia.

Collaboration activities, such as industry research funding, and product development agreements are preferred by industry players to strengthen their product portfolio and proprietary technologies dedicated to rapid diagnosis of variety of cancer diseases. 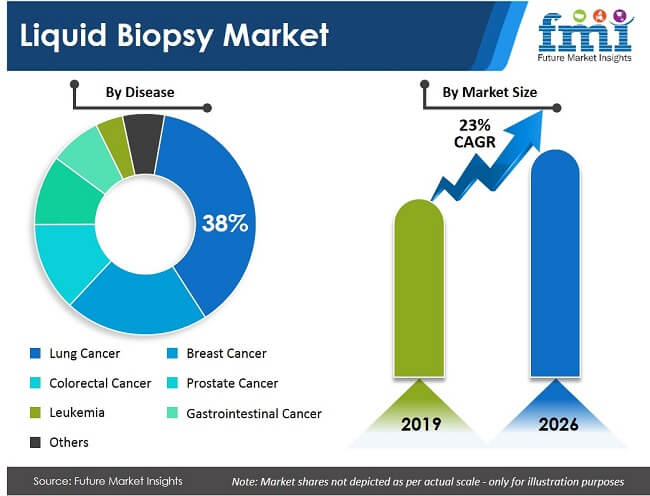 Why liquid biopsy market is expected to evidence double digit growth rate in the future?

Minimally-invasiveness, and rapid diagnosis with high accuracy and precision are the key factors expected to increase adoption of liquid biopsy among the end-users.

Which biomarkers type is expected to lead the liquid biopsy market?

Which type of disease holds the high market potential?

Lung cancer is a dominating disease area in the current liquid biopsy market owing to large patient base and capability of liquid biopsy to perform diagnosis with minimal sample.

What is the competitive nature of the current liquid biopsy market?

Which region will lead the global sales of liquid biopsy market?