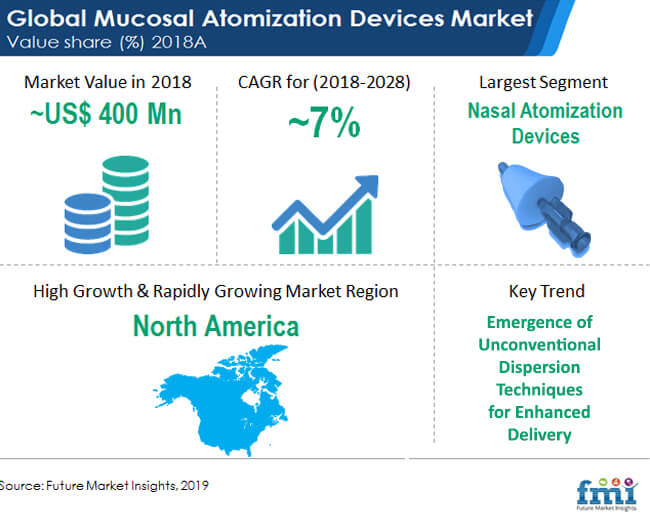 Improved Devices with Technological Advancements in the Healthcare Field

Technological advancements in the field of healthcare are leading to the introduction of new and advanced mucosal atomization devices, which is one of the major factors, responsible for the significant growth of the market.

The diagnosis rate of sinusitis is also high, which will further be a positive aspect for the market. Apart from these factors, there can many other factors, which can be responsible for the significant growth of the mucosal atomization devices market. Increasing collaborations between different companies, increasing per capita income in various emerging regions, etc., can increase the overall growth of the mucosal atomization devices market. 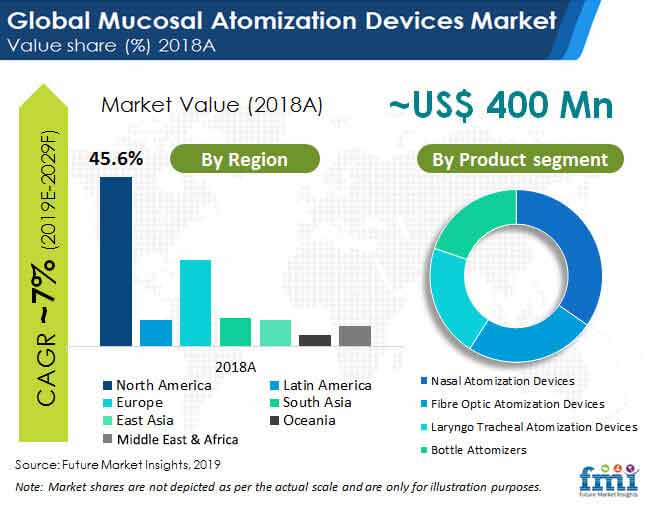 Technological advances have played an active role in transforming numerous key industrial sectors. The healthcare sector has significantly benefitted from the onset of reliable, efficient, cost-effective, and novel drug delivery technologies for several years and mucosal atomization devices (MAD) presents a prime example of the same.

Intranasal Drug Delivery – Away from Needles

In the current scenario, although needle-based injections are the most common route of injectable drug delivery and administration of vaccines, the trend is witnessing a rapid change. The shortcomings of needle-based injections along with fear among patients has led to the onset of novel needleless intranasal drug delivery technologies such as mucosal atomization devices for delivery of intranasal corticosteroids and other drugs.

For instance, a significant number of patients do not opt for needle-based treatments owing to the pain and discomfort caused by needles. Thus, the failure to provide optimum treatment to a large population prompted drug manufacturers to innovate and develop other alternatives. The advantages of advanced intranasal vaccine delivery technologies over the existing treatments has created lucrative opportunities for drug manufacturers.

Further, as emerging intranasal delivery technologies eliminate the use of needles, there is no risk of needle-stick problems. Besides, other advantages include, reduced fear among patients, painless drug delivery, and ease of disposal.

From the manufacturer’s point of view, sterile delivery issues are eliminated. Thus, market players operating in the drug industry are focusing on developing reliable, safe, auto-disposable nasal vaccine delivery systems. The logistic benefits coupled with safety features of mucosal atomization devices have created several opportunities for manufacturers especially in the developing regions where the demand is steadily growing.

The demand for mucosal atomization devices is expected to surge in North America and Europe in the coming years owing to the presence of large number of hospitals and efficient healthcare infrastructure. Further, medical technology in the developed regions of North America and Europe has made tremendous progress in the last decade which has resulted in the advent of innovative and effective medical solutions for an array of medical problems.

In addition, prominent market players are prioritizing product launches owing to the growing demand for novel intranasal drug delivery systems. Further, manufacturers have identified mergers and acquisitions as an effective strategy to penetrate the lucrative markets in untapped regions.

Structured WHO Guidelines for Manufactures

Manufacturers operating in the mucosal atomization market have to comply with the nasal vaccine delivery guidelines laid down by the WHO. According to the WHO guidelines for drug administration, the route of delivery must consist a single-use delivery system that is auto-disposal after use. Auto-disposal offers efficient infection control and reduces the risk of cross contamination by a considerable margin. Thus, the WHO and other regulatory agencies insist medical device manufacturers to comply with the laid down guidelines.

Owing to the WHO guidelines for the production of new-age medical devices, manufacturers have established a growing need to innovate their products to suffice the growing global demand.

Leading manufacturers operating in the mucosal atomization device market are focused on developing products that meet consumer demands and the current regulatory guidelines. At present, consumer awareness regarding mucosal atomization devices in the developing regions is comparatively lower than the developed regions such as North America and Europe. Thus, established manufacturers have pinned their hopes on mergers and acquisitions to penetrate the market in nations such as India and China.

The growing prevalence of chronic diseases such as sinusitis, surge in demand for needleless intranasal drug delivery, increasing consumer awareness over health and wellness, and ongoing R&D activities are likely to provide an impetus to the growth of the global mucosal atomization market.