Due to the decreased activity of the motor reflexes of geriatric patients, they are prone to trauma and minor accidents owing to age. Increasing geriatric population is eventually increasing the number of patients with nerve injury. According to an article presented by Ademola Adewale, approximately 40% of people older than 65 years report at least one fall per year, which increases to 50% in those older than 80 years. In long-term care facilities, the risk of falls increases to more than 50%-60% per year. Ageing is one of the major factors leading to an increased incidence of nerve damage due to trauma, and this factor is fuelling revenue growth of the global nerve repair market during the assessment period.

Even though nerve auto graft technique is a gold standard treatment in the realm of nerve repair, there are several other treatments available in the market. One of the techniques is the regeneration of the damaged nerve using stem cell therapy. In this procedure, the adult stem cells are processed and are directly administered to the damaged part of the nerve, eventually regenerating the damaged nerve. These alternative techniques are likely to hinder sales revenue growth of the nerve repair market during the assessment period.

As per the current market scenario, it is clear that the nerve repair market is predominately lucrative in the developed regions of the world like North America, Europe, etc. Many of the developing countries like India, Mexico, Indonesia and few of the Middle Eastern countries have a less market penetration of the nerve repair biomaterial products. Hence, there is an immense scope in promoting nerve repair procedures in these emerging markets and this would immensely benefit companies.

The Epineural Nerve Repair segment dominated the global nerve repair market in revenue terms in 2016 and the trend is projected to continue throughout the forecast period with the segment estimated to record an attractiveness index of 1.5. 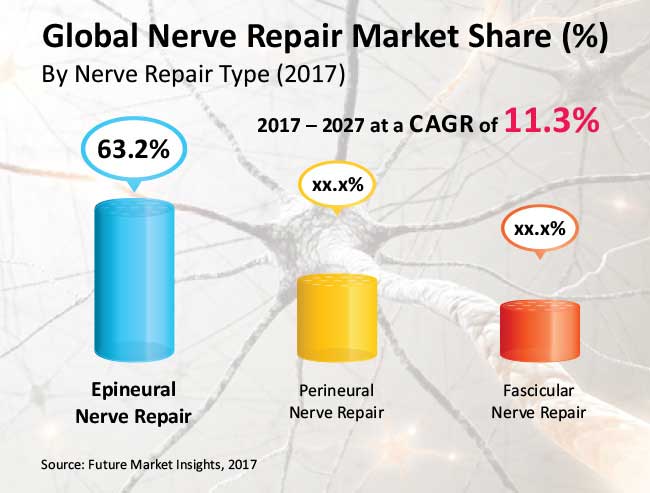 "The North America nerve repair market is estimated to account for the largest revenue share of 41.0% in 2017 and grow at a CAGR of 12.9% during the forecast period. Increasing geriatric population and growing demand for advanced medical technology in the United States represents key growth opportunities for manufacturers of nerve repair products. The Japan nerve repair market is expected to register the second highest CAGR of 10.8% over the forecast period due to rising healthcare awareness and demand for advanced medical technology.”