Oil & gas pipelines are an essential part of the energy infrastructure, and tackling corrosion is one of the primary challenges for the industry. Pipeline failures can cause environmental damage on a global scale; hence, the application of oil and gas pipeline coatings is of utmost importance to operators.

According to the 'International Measures of Prevention, Application and Economics of Corrosion Technology (IMPACT)' study, the global cost of corrosion removal was estimated to be around US$ 2,505.4 Bn in 2013. This is equivalent to 3.4% of the global GDP. However, by using current available corrosion control practices, approximately 15% to 35% of the total cost of corrosion can be saved, which is between US$ 400 Bn to US$ 900 Bn, globally.

Therefore, manufacturers involved in the pipeline coatings industry have added new solutions such as self-healing and damage-tolerant pipeline coatings. These have microcapsules loaded with film forming, and anti-corrosion agents that create a barrier to prevent any moisture from reaching the surface.

Pipelines play a major role in the transportation of oil and gas products from one facility to another. Major intra-country and inter-country pipeline projects are under development to meet the growing demand from the oil & gas sector across the globe. With the global crude oil prices recovering, global investments in the industry are anticipated to grow by 6% between 2017 and 2023.

As a part of these investments, an estimated 36,000 kilometers of onshore and offshore pipelines are planned in the coming 5 years to connect various production facilities, processing plants, refineries, and distribution facilities.

The coatings industry is one of the most heavily-regulated industries across the globe. Hence, in recent years, manufacturers have been focusing on the production of coating technologies, which meet regulatory standards. Due to high VOC emissions, the solvent-based coatings market is witnessing volatility. 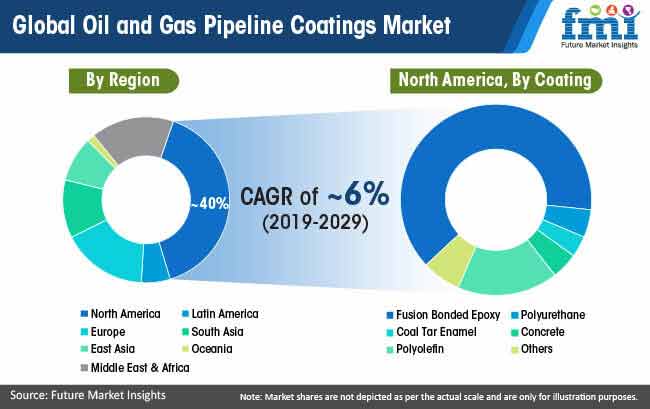 Accounting for over 40% of total sales of oil & gas pipeline coatings, manufacturers are specifically emphasizing this category. Concrete and coal tar enamel coatings, on the other hand, are accounting for relatively low revenue share, despite their primacy in pipeline industry for over a century.

Growth prospects of the market will remain high in North America owing to increasing energy demand at above-average levels and ascending oil production in the U.S. South Asian market is also set to reflect a lucrative opportunity, as a number of projects lined up for the years to come. With oil & gas companies seeking to further develop their downstream sector, South Asia becomes the top target market for them.

Manufacturers are focusing on leveraging new technologies and formulations to stay ahead of the curve and are currently focusing on the use of nanotechnology. Nanostructured pipeline coatings are not only hard and abrasion-resistant but also provide effective coating to internal and external complex surfaces. Moreover, greater emphasis on eco-friendly products has led to realignment of manufacturers’ strategies with the use of nanotechnology.

With an exponential rise in oil exploration activities, deeper offshore installations, and more unconventional oil and gas transporting through pipelines, new corrosion challenges are appearing. This, in turn, is leading to surge in demand for innovative oil & gas pipeline coatings.