Polymeric sand, extensively used to fill joints between different kinds of pavers such as brick pavers, stone pavers, asphalt pavers and concrete pavers, has been experiencing healthy demand in the recent past. The global polymeric sand market report provides an overview of the market dynamics, including drivers, restraints, trends, opportunities and value (US$ Thousands) and volume (Tons) projections, along with comprehensive facts regarding the polymeric sand market for the period between 2018 and 2028. 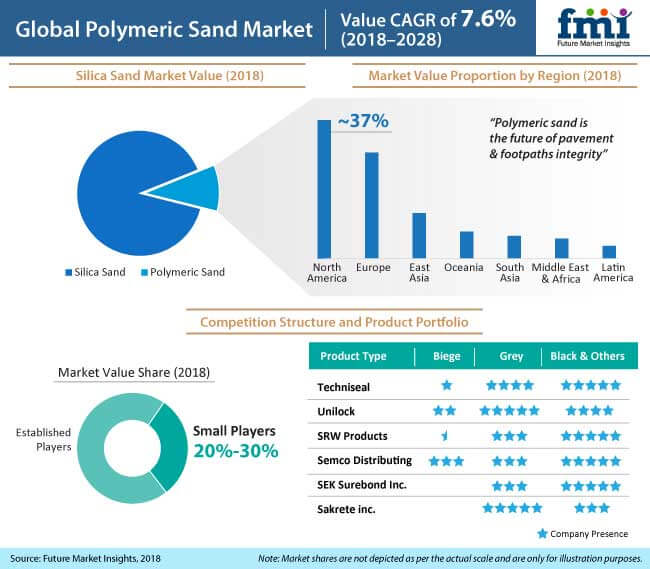 Polymeric sand, as a product type, is highly recommended for filler operations in footpath-like structures. It is turning over as a choice of material replacing conventional cements and mortars. Polymeric sand helps in resisting erosion caused by rain, wind, sweeping, and even pressure washing. It also resists insect infestation and weed growth, leaving pavers clean at all times.

Moreover, with DIYers becoming confident about the use of polymeric sand in existing patios and walkways, the global polymeric sand market will grow remarkably in the coming years. Furthermore, polymeric sand is an effective alternative to the quick-fix mason sand solution that offers a reliable solution rather than the temporary fix for concealing weeds and refreshing the appearance of patios.

Residential infrastructure is turning into an attractive target end-use industry for the adoption of polymeric sand across the globe. Government initiatives and schemes in various regions to refurbish and construct residential units to accommodate increasing population is leading to substantial consumption space of polymeric sand. Housing recovery and increasing demand will drive the residential construction sector. This, in turn, is expected to propel the demand for polymeric sand during the forecast period.

Regional governments are planning launch initiatives to support the development of the construction sector, which in turn, will increase the consumption of polymer sand. Growth of the polymeric sand market is being primarily driven by comprehensive infrastructural developments in developing economies of East Asia as well as North America and Europe. North America and Europe, cumulatively, will account for almost 50 % of the total incremental $ opportunity created in the polymeric sand market.

Companies are focusing on bringing advancements in the polymeric sand market to increase their reach and address the needs of end users. For instance, Ash Grove Packaging, a part of the CRH Company, offers products online on platforms such as Amazon. Retail outlets are a prominent sales channel for polymeric sand.