The global oil and gas industry was a major victim of the COVID-19 pandemic due to a drastic slump in energy demand. Such was the impact of the pandemic on the oil industry that benchmark Brent crude oil prices plummeted to a historic low of under US$ 20 per barrel in April, 2020.

This led to most major oil producing countries such as Saudi Arabia, Russia, Iraq, UAE, etc. resorting to production cuts to stabilise global crude prices. These production cuts still continue. The net result of this downturn for the market was a reduction in demand for produced water treatment systems.

However, the situation is now changing with several major economies opening up and the demand for fossil fuels incrementally increasing. Oil prices have also consequently reached their pre-pandemic levels and it is only a matter of time before major oil producers withdraw their production cuts.

A similar trend is being observed in natural gas well. Furthermore, energy security has once again occupied centre-stage since energy security is viewed as vital for countries to recover from their Covid-19 induced economic slump. As a result, sales of produced water treatment systems are also expected to rapidly pick up in the near future.

In previous years, environmental concerns and governmental regulations had led the demand for produced water treatment systems. While these factors will continue to influence market trends, the pandemic has also accelerated certain geo-economic shifts that impact the market.

Two such key shifts are attempts by oil and gas rich countries in the Middle East and Africa to diversify their economies, and increase in production by developed countries like the USA and those in Europe to reduce their energy dependency. As a results, certain key shifts are expected to take place in the regional demand for produced water treatment systems. 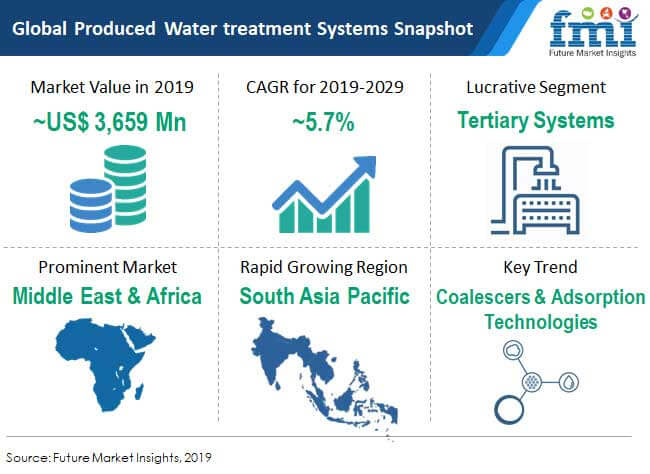 A Paradigm Shift to ‘Advances in Water Treatment Technologies’

The oil & gas industry has been accelerating its shift to technologies that tend to reduce almost every toxic effluent from water, such as induced gas flotation, compact flotation unit, nutshell filtration, and coalescers being one of the most sought-after type of technologies.

With regulatory norms tightening in terms of hydrocarbons and other toxic content found in produced water, manufacturers ought to focus on innovative solutions, such as produced water treatment systems that allow elimination of toxic chemicals from water, making it ideal for disposal or reuse purposes.

With rising oilfields globally and increasing oil extraction activities relating to onshore and offshore reserves, especially in emerging regions such as MEA and South Asia Pacific, produced water treatment systems are set to witness an upsurge in the demand over the upcoming years.

Agencies such as European Water Association (Europe), India Water Works Association (India), and Environmental Protection Agency (U.S.), among several other government authorities, are proactively engaged in framing policies and regulations related to the water treatment for disposal or reuse purpose.

For instance, in the U.S., EPA (Environmental Protection Agency) has made it mandatory for industries to treat water before it is disposed out of the facility. Specifications pertaining to maximum permissible contamination levels have been framed in this regard. 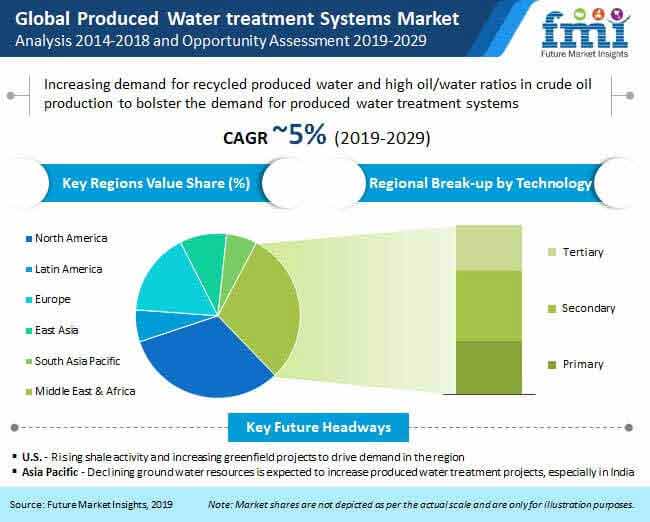 Growing Remote Operations in the Oil and Gas Industry

Key players in the oil and gas industry in North America and Europe are entering into remote areas for exploration, drilling, and production activities. Key oil and gas operators in these regions are acquiring contracts for such remote sites.

Acquisitions, Collaborations, and Partnerships to Penetrate into Overseas Market

By the end of 2018, oil prices have gained its momentum to reach more than US $65 per barrel. This has shown the opportunity for manufacturers and end users of various industrial products. The rise in oil price has generated a linear trend towards new orders and contracts irrespective of end-use industries.

Key end-use industries that are targeted are oil and gas, chemical and petrochemical, and power generation industries. Asia Pacific is the prominent region that is driving new orders and contracts related to the produced water treatment systems. For instance,

Advancements in oil & gas industry have always been parallel to development of water treatment infrastructure. Effective management of produced water became a significant part of the oil & gas business, considering its potential to be a source of fresh water, in addition to stringent legislations put in place for unchecked discharge of produced water in the environment.

Petroleum, a major source of energy and revenue for many countries, is produced with large volumes of waste, with wastewater comprising over 80% of the liquid waste. With ever-increasing water demand and more stringent environmental limits, produced water treatment systems gained increasing momentum over the years, to release clean water, store energy, and recover valuable materials from the produced water with minimal impact on the environment. This has also led to considerable increase in consumption of water treatment chemicals across the globe.

As handling of produced water becomes critical in petroleum exploration and production operations, Future Market Insights (FMI), in its new study, analyzes the current technologies for the management of produced water and their growth prospects. The study also brings to fore credible insights on produced water treatment systems that can assist the stakeholders in well-informed decision-making.

Intensification in exploration activities, both offshore and onshore, has worked in tandem with development of various produced water treatment systems. With the world population and the demand for freshwater on the increase, market players are constantly exploring new technologies that can significantly reduce energy consumption and bring down the relatively high cost of existing systems.

Considering the lack of public acceptability for produced water as a source of clean water, market stakeholders are paying attention on incorporating non-chemical methods in produced water treatment, including the use of filters, polymer membranes, membrane chemicals and reverse osmosis.

Produced water treatment systems continue to garner significant traction, in the view of increasing stringent government regulations related to impact of untreated produced water on the environment and reinjection policies in the oil & gas sector. However, complying with the regulatory norms has been creating several challenges for the manufacturers, such as relatively high cost of equipment for tertiary systems as compared to primary and secondary systems.

The majority of the global oil production has historically stemmed from the large oil field in Middle East, while countries in North America are increasingly playing an important role in the oil production. Market players remained focused on exploring opportunities in these regions, on the account of hefty investments in the development of unconventional resources, resulting in significant increases in produced water volumes.

As leading oil & gas companies continue to acquire contracts for drilling operations and exploration activities in remote areas, a large amount of produced water would be generated. Therefore, the market players should be looking at a period of sustained demand.

As governments as well as environmental groups have raised many concerns about the discharge and reuse of produced water, market vendors will need to redefine their strategies, producing analytical methods and performance data of chemical formulations that enter the market. Constant restrictions on disposal of produced water lined with scarce water resources across the globe are further likely to provide opportunities in advanced treatment technologies.

While technologies such as coalescing plate separation for onshore and cyclonic de-oiling and de-sanding for offshore locations continue to influence business strategies, manufacturers are rigorously investing in R&D activities on combination of two or more technologies.

The market players are further experimenting cost-effective technologies such as electrochemistry-driven treatment to achieve zero pollutant discharge and reduction in energy consumption that could lead to the production of clean water. With regulatory norms tightening in terms of hydrocarbons and toxic chemical constituents found in the produced water, market players will also need to focus on innovative, eco-friendly solutions for future management.

Sensing the growing demand and limited availability of fresh water, market stakeholders are planning to establish new produced water treatment and recycling facilities in Middle East and North American countries. Development and launch of application-specific, tailored product offerings and systems will further continue to influence the growth strategies of the market players.