An Incisive, In-depth Analysis on the Rare Earth Metals Market

Asia Pacific Excluding Japan is expected to register faster growth among all other regions in the global rare earth metals market. The region is projected to strengthen its market value share from a little more than 70% in 2016 to almost 77% by the end of 2026, recording a massive gain of 640 BPS between 2016 and 2026. China followed by India is the leading consumer of rare earth metals. The rare earth metals market in the APEJ region is forecast to expand at a robust CAGR of 9.4% during 2016- 2026 and is likely to be valued at more than US$ 5,600 Mn by the end of 2026. The APEJ region is projected to create incremental $ opportunity of more than US$ 3,300 Mn between 2016 and 2026. APEJ is expected to be a relatively attractive region in the rare earth metals market during the forecast period and is likely to incline towards high value–high growth.

Rare earth metals play a crucial role across a gamut of high growth potential industries. As such, demand for these has witnessed a steady growth over the past few years. This, coupled with attractive revenue generation has prompted the entry of several market participants in China and other APEJ countries during the past decade. The majority of the consumers of rare earth metals are dependent on Chinese rare earth output, which is boosting the China market for rare earth metals. 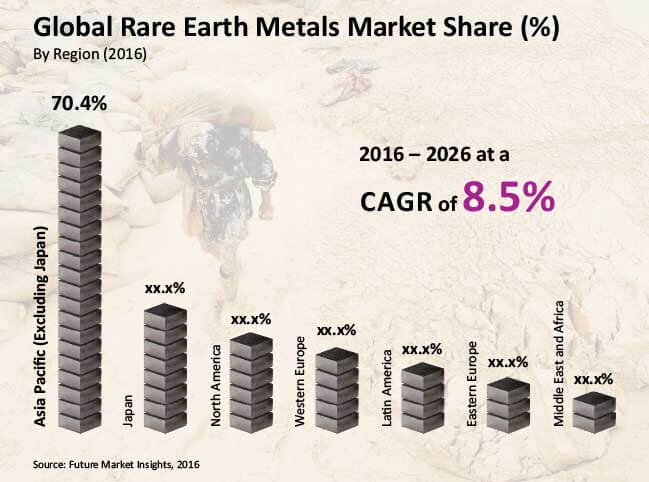 In APEJ, the Neodymium segment is projected to gain a massive 270 basis points in market share by 2026 as compared to that in 2016. The Neodymium segment in the APEJ rare earth metals market is projected to increase 2.8X and be valued at more than US$ 2,200 Mn by the end of 2026. This segment is estimated to create about 42% of the incremental $ opportunity in the APEJ rare earth metals market by the end of 2026.

India, South Korea and China are expected to provide significant opportunities in the rare earth metals market over the coming years. North America, Japan and Asia Pacific are projected to remain the key regions in the global rare earth metals market throughout the forecast period. In a new publication titled “Rare Earth Metals Market: Global Industry Analysis and Opportunity Assessment, 2016–2026,” the analysts of Future Market Insights have indicated that leading players in the global rare earth metals market are focussing on strategic mergers and acquisitions with other players in the market in order to increase their global reach and enhance their product offerings. We have differentiated the strategies of the manufacturers in the market and observed that long-term partnerships with suppliers is necessary to narrow down the demand-supply gap. Manufacturers are focussing on product development and innovation strategy.

The report also highlights the consumption of primary rare earth metals across the globe. Weighted Average Selling Price (ASP) has been considered to deduce market values. Top-down approach has been used to assess market numbers for each product category. Bottom-up approach has been used to counter validate the market estimations. Macro-economic indicators such as GDP and industrial production index have been considered while forecasting market numbers.

We have considered Year-on-Year (Y-o-Y) growth to understand the predictability of the market and to identify growth opportunities for companies operating in the global rare earth metals market. Another key feature of this report is the analysis of key segments in terms of absolute dollar opportunity. This is usually overlooked while forecasting the market. However, absolute dollar opportunity is critical for assessing the level of opportunity that a provider can look to achieve, as well as to identify potential resources from a sales and delivery perspective. To understand key segments in terms of their growth and performance in the global rare earth metals market, Future Market Insights has developed a market attractiveness index to help providers identify existing market opportunities.

A number of primary and secondary sources have been consulted during the course of this study. Secondary sources include Factiva, World Bank, and Hoover’s. Companies’ annual reports and publications have also been examined while drafting this report. Market size and forecast for each segment have been provided in the context of global and regional markets. The global rare earth metals market has been analysed based on anticipated market demand. Prices considered for the calculation of revenue include average regional prices obtained through primary quotes from numerous regional rare earth metals manufacturers, suppliers, and distributors. All key end users have been considered and potential applications have been estimated on the basis of secondary sources and feedback from primary respondents. Regional demand patterns have been considered while estimating the market for various end users of rare earth metals across different regions.