Connected vehicles are the need of the hour

With an increasing focus on the Internet of Things (IoT), there has been a substantial increase in the connected vehicles across the world. Both mid-range and high-end cars are being unveiled with sensors built in. These sensors are able to enable vehicle to vehicle safety, automated driving capabilities, and vehicle data tracking related to engine diagnostics and vehicle usage.

Connected cars are also able to generate information pertaining to traffic flows in real time. This information can be obtained with the help of the transportation predictive analytics and simulation market, allowing better analysis of traffic flows.

The number of vehicles, particularly in developing countries, has been skyrocketing in the last few years and even transportation infrastructure has shown decent growth. Large-scale migration to urban areas has exerted enormous pressure on roadways, leading to an absence of safe public transportation, overcrowded roads, inadequate traffic management, lack of road safety measures, parking hassles and poor road conditions.

Simulation software and predictive analytics for the purpose of transportation gathers data from in-built vehicle sensors and refines it to deliver meaningful analysis. Data analysis can be extremely helpful in predicting traffic flows, thereby reducing congestion and improving traffic movement and the overall road experience.

The demand for data driven information has been rising day by day among transit companies. Companies such as Lyft and Uber use predictive analytics to fill the demand-supply gap that exists for cabs. Through the transportation predictive analytics and simulation market, transit companies are able to identify which region has the highest demand and also the number of cabs that may be available in that specific region. Messages can be sent to drivers in this case for them to reach their destination and cater to the needs that may arise there.

Roadways to remain the largest segment in terms of transport components

The Roadways segment was valued at more than US$ 620 Mn in 2016 and is predicted to touch about US$ 1.7 Bn by the end of the forecast period, registering a CAGR of 9.8% for the decade – the highest CAGR among all the segments by component of transport. An incremental dollar opportunity of more than US$ 1 Bn is expected in the Roadways segment of the global transportation predictive analytics and simulation market between 2017 and 2027. Roadways is predicted to be the most attractive segment and is expected to register significant Y-o-Y growth rates during the forecast period. 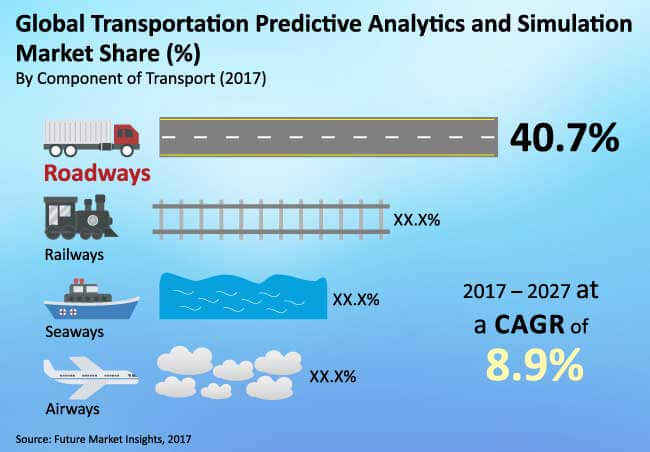 By analysing parameters such as customer buying patterns, seasonal influence and available cargo capacity on a daily, weekly or monthly basis, predictive analytics can help companies maximise revenue and minimise costs of transportation by efficiently predicting customer demand at the same time dealing with capacity limitations if any.

North America is well-known for its developed transport infrastructure, particularly in roadways. The Roadways segment by component of transport in the North America transportation predictive analytics and simulation market is anticipated to reach a market valuation in excess of US$ 600 Mn by the end of 2027, up from about US$ 190 Mn in 2016. This represents a CAGR of 11.4% during the 10 year period from 2017 to 2027.