The global two wheeler suspension system market experienced 4.3% blip in 2020, attributed to the onset of COVID-19. Growth is likely to remain sluggish until 2021, owing to production shortfalls experienced due to government imposed shutdowns and reduced demand.

However, a fillip is anticipated post-COVID-19, as consumers are likely to migrate from public transportation fearing infection, opting for an alternative approach to personal mobility. Hence, 2-wheeler sales are expected to rebound, restoring the market’s growth trajectory, albeit at moderate levels.

As urbanization picks up pace, per capita vehicle ownership has also risen. It is expected that the global two wheeler market shall cross 60 million by 2025. This is in response to growing traffic congestion problems experienced due to rising four-wheeled automobile ownership, compelling consumers to opt for quicker mobility alternatives.

The burden is especially high across developing countries in Asia. India especially represents a significant investment destination for 2-wheeler suspension system market players, with 90% of India using the road network for passenger traffic.

Likewise, in 2018, Americans spent an average of 97 hours a year on roads due to congestion, according to the 2018 Global Traffic Scorecard, costing the nation almost US$ 87 billion, with average cost per driver amounting to US$ 1,348. Based on these trends, the global two wheeler suspension system market outlook appears positive.

In recent years, the global e-commerce market has expanded prolifically. According to UNCTAD, global sales reached US$ 25.6 trillion in 2018, representing an increase of 8% from 2017. Consequently, transportation services to deliver products is also increasing.

Most delivery services utilize two-wheelers to ensure fast and timely delivery of consumer products, leading to increased motorcycle, moped and scooter sales across the world. Their easy manoeuvrability across heavily congested roads makes two-wheelers an ideal choice for delivery agents.

Increasing automotive ownership has exerted an upward trend in gasoline and fuel prices around the world. Consequently, consumers have experienced increased expenditure on vehicle maintenance, leading to them preferring cheaper alternatives. As a result, two-wheeler ownership is steadily inclining.

In addition, two-wheelers offer double the mileage of a typical car, thereby allowing owners to incur significant cost savings. On an average, a motorbike yields 43 to 56 miles per gallon of gasoline, which surpasses even the most fuel-efficient cars.

Manufacturers are capitalizing on this trend to introduce suspension systems aimed at achieving fuel economy. BMW’s F 750 GS motorcycles, for instance, is equipped with a water-cooled 4 stroke in-line two cylinder engine which helps achieve a maximum speed of 118 mph, yielding a mileage of 57 miles per gallon.

In 2019, the North America two wheeler suspension market size was US$ 119.5 Mn, declining to US$ 112.1 Mn due to the COVID-19 induced trough. Albeit sluggish, growth prospects will rebound in the post-pandemic scenario.

As of August 2020, motorcycle sales across the United States declined by over 15%, as consumers increasingly adopt social distancing measures to curb the pandemic’s spread. Fortunately, as restrictions began easing in the latter half, sales are slowly rebounding. 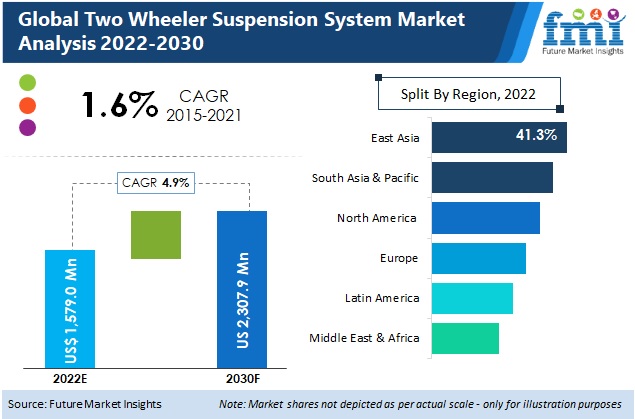 As of today, nearly 8% of households (10 million) in the United States own at least one motorcycle. As a result of this increasing ownership, the two-wheeler suspension system market growth is likely to escalate.

The European Commission’s Mobility and Transport Division has established numerous safety standards to be complied with by two-wheeler manufacturers, thus paving way for suspension systems sales across the continent.

The South Asia & Pacific market is expected to grow the fastest, owing to surging two-wheeler ownership across developing countries such as India. Growth is likely to be underpinned by the presence of various manufacturers owing to favourable investment climates across these countries.

Request a sample specific to the South Asia & Pacific market.

The motorcycles suspension systems segment is likely to be the most attractive market, likely to grow at nearly 5% CAGR throughout the forecast period. Increasing incidence of motorbike ownership across developing countries is expected to provide stimulus to market growth.

At the same time, scooters are expected to generate significant growth opportunities in the future. This expansion is largely credited to increasing ownership of electric two-wheelers with the objective of reducing carbon emissions and achieve environmental sustainability.

The aftermarket sales of two wheeler suspension systems are expected to provide traction to the global market, spurred by the need for constant after sales maintenance of two-wheelers. The segment is expected to reach US$ 563.9 Mn by 2021.

Consequently, allied markets such as those of spare parts, suspension systems, shock absorbers and braking systems all experienced major setbacks due to inadequate inventory. Fortunately, the past few months have recorded stability in operations, with governments lifting most restrictions, allowing automotive manufacturers to resume production.

As concerns about limited to no social distancing compel people to abstain from using public transport, they are investigating other travel alternatives. As a result, sales of motorbikes have escalated in recent months. For instance, British Automotive Giant Royal Enfield reported a 1.36% increase in domestic sales across India.

Likewise, Yamaha Motor India reported a 31% increase in sales from October, reaching a total of 60,176 units. Such promising sales figures are expected to peg the two wheeler suspension system trends on a positive trajectory throughout the short-run forecast period.

*This list is indicative- full details about the two wheeler suspension system players is available upon request.

Manufacturers are concentrating on expanding their geographical footprint by expanding their production capacities, collaborations, partnerships and contract acquisitions. Additionally, they are introducing tailor-made products as per customer requirements, thus attracting a wider clientele.

In May 2020, ZF Friedrichshafen AG successfully completed the acquisition of WABCO with the objective of furthering a customer-focused powerhouse for commercial vehicle technology. WABCO is expected to function as an independent division within the company.

Recently, in December 2020, KYB Corporation announced the initiation of mass production for KADS, an electronically controlled suspension system for motorcycles which integrates control technology and hydraulic technology. The system is expected to be installed in Yamaha Motor Co. Ltd.’s TRACER9 GT model.

How will the two wheeler suspension systems market grow until 2030?

The global two wheeler suspension system market is expected to reach US$ 2.3 Bn by 2030, owing to increasing two-wheeler ownership across emerging countries. However, a substantial blip was registered due to COVID-19 in the wake of declining output

What drivers are likely to underpin the market growth?

Which is the most lucrative two wheeler suspension system market?

South Asia & Pacific is expected to attract maximum investment, particularly across India as it is the world’s largest two wheeler market. Hence, prominent manufacturers are expected to glean maximum revenue out of the South Asian economic giant in the forthcoming forecast period

Which are the prominent two wheeler suspension system market players?