The solid structure of vending cups influences their cost and so, they are priced higher than water cooler cups. Vending cups are becoming popular in the market, with manufacturers targeting improvement in printability as well as consumer convenience.

Public places are high revenue generators for the global vending cups market. Increasing demand for items such as packaged beverages, coffee, and tea in public places will continue to play a pivotal role in the growth of the global vending cups market. The market is also expected to grow against the backdrop of growth in demand for intelligent vending machines in places with high footfall.

In many countries in Western Europe and North America, footfall in public places, such as bus stops, airports, railway stations, and others, has been increasing at a steady pace, which has been a key factor leading to the growth of the global vending cups market.

It is difficult, and not feasible, for retailers and brand owners of beverages to have a physical store in places that generate high demand for beverages. A factor due to which, they are resorting to setting up vending machines, leading to an increased demand for vending cups. Since vending machines are becoming more technologically advanced in terms of user experience, vending cups are expected to gain more traction in regions such as North America, Europe, and the Asia Pacific.

Also, the introduction of smart interaction options in systems has effectively increased consumer trust. Manufacturers of vending cups are aware of this transition and are currently focused on enhancing their production infrastructure and capacity to meet the growing demand.

As a product, vending cups have their own share of associated environmental problems. Several brand owners and manufacturers market their vending cups as fully recyclable. However, it has been found that less than 1% of the vending cups end up being recycled.

In many cases, coffee vending cups cannot be recycled as they get contaminated by liquid. Similarly, paper vending cups get rejected from recycling facilities as they contain a PE layer. Furthermore, the complex production process of vending cups also means that there is a significant difference between their recyclability and the rate at which they are being recycled. 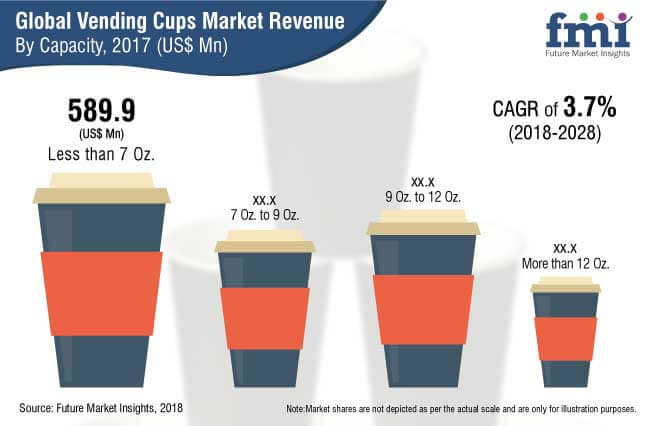