However, reluctance to shift from conventional devices to wearable devices, lack of awareness among general population, device related issues such as accuracy, memory problem etc. can impede growth of the market.

Premier players in this market are manufacturing innovative and next-generation products that are smartphone compatible to consolidate their position in the market. Foray into new markets is another key strategy of players operating in the global wearable medical devices market.

The global wearable medical devices market has been segmented into seven major regions: North America, Latin America, Eastern Europe, Western Europe, Asia Pacific Excluding Japan (APEJ), Japan and the Middle East & Africa (MEA). In terms of value, the North America market has been estimated to dominate the global wearable medical devices market in 2016, and is expected to witness highest CAGR of 7.4% over the forecast period. APEJ, Western Europe and Japan are estimated to be the fastest growing markets among regional markets.

APEJ market is expected to expand at a CAGR of 7.0% over the forecast period. In North America, wearable monitoring and diagnostic device segment is expected to grow at faster rate to reach the value US$ 6,920.2 Mn by 2026 end. Market in MEA is expected to exhibit subdued market growth owing to lower adoption of wearable devices in the region. 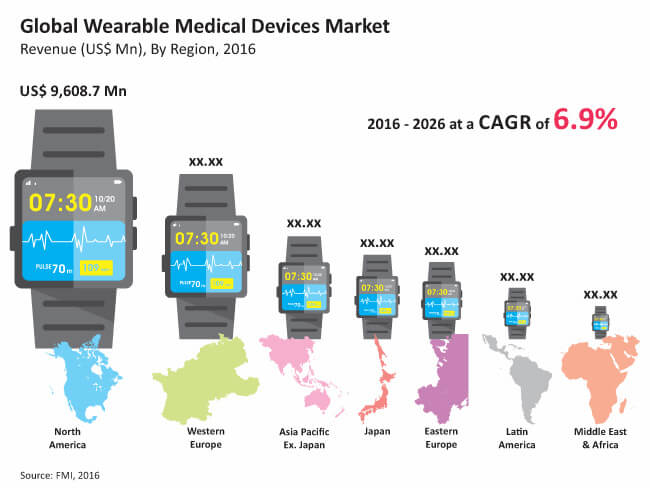