Wrinkle release spray manufacturers have been capitalizing on the increasing fabric care sector sales since the last few years. Increasing consumer spending on fabric care is likely to create lucrative opportunity in upcoming years especially in developing economies such as India, China, Brazil, UAE, Russia, and Australia. Thanks to hectic lifestyle, consumers are seeking out products that will ease their daily chores. This is expected to create attractive opportunities for the growth of the market.

How Does the Historic and Future Outlook of Wrinkle Release Spray Market Compare?

Wrinkle release sprays were formulated to relax the fabric’s fiber, smoothing creases on it. It allows traveler to avoid keeping heavy ironing machines while travelling and it works like an iron function. It also helps in refreshing the fabric. Wrinkle release sprays are available in scented variant, to prevent clothes’ odor after they are freshly laundered.

Moreover, as a result of the increasing demand for scented wrinkle release spray products, market players have been focusing on product diversification, launching new and refreshing fragrances. According to FMI’s analysis, wrinkle release spray sales are set to grow at 5.0% CAGR between 2020 and 2030.

How Big will be the Demand for Wrinkle Releasing Spray from Fabric/Apparel Care Industry?

The laundry care industry is experiencing strong year-on-year growth as a result of hospitality, retail, and tourism industry. This too will contribute towards the expansion of the overall market.

For the most part of 2020, consumers remained home-bound and self-quarantined during extended period of lockdown around the world. Work from home culture became more prevalent than ever before and virtual communication emerged as the most trusted and safest ways of communications. As people around the world stayed indoors, it limited the utilization of new, pressed and wrinkle free clothes, as people favored wearing casuals while working from home.

Being a less complex products and products which are not chemistry oriented, wrinkle release spray manufacturers are developing item with new highlights. One of the main wrinkle release spray brands has presented an economic choice on Amazon, which besides releasing wrinkles, kills odor and eliminates static charge in fabric.

Simplicity of applicability is a key factor fueling the demand for wrinkle release sprays. Customers simply need to pick the container and spray it on fabric, which at last diminishes the requirement for pressing the apparel or fabric.

A range of the brands have collaborated with detergent and softener brands, and are offering packaged deals. This business approach additionally creates consumer awareness about the brand and inevitably assists brand in gaining traction.

Unlike in the West, the market in the East comparatively newer. A smaller number of consumers identify these sprays and a much lesser number of customers actually end up adding the product to their cart. Since, being at undeveloped stage, the Asian market offers lucrative opportunities for wrinkle release spray brands.

South Asia represented under 17% sales share of wrinkle release spray out the global sales in 2019. Europe ruled the sales with somewhat more than 23% offer in the very year. Regardless of being a market at undeveloped stage and an enormous populace base, Asian market are yet not ready for investment. Shoppers in high potential nations such as China, India, and Indonesia will be prepared to receive such products simply after 2025.

The fabric care industry is vulnerable to changes in consumer preference. For example, consumer stability, regular usage and, convenience offered by products are some of the key determinants influencing a consumer’s choice. Hence, negative impact felt by the fabric care industry amid COVID-19 also had an adverse impact on overall wrinkle release spray sales.

Moreover, due to this period of economic slowdown, buyers will as a rule save money to deal with pandemic situation. Changing behavior pattern among consumers is likely to have significant impact on the fabric care industry, negatively affecting sales prospects for wrinkle release spray market.

Regions such as Oceania, South East, and the Middle East and Africa are as of now seeing a moderate growth in the expansion of business business on private and business fronts, which is influencing interest for wrinkle release spray.

Major wrinkle release spray brands in the market are segment into mass and premium brand. Featuring a very slight difference amongst the brands play an important role to differentiate the brands available in the market.

Brand owners are choosing the right sales channel by evaluating the market dynamics and presence of their product.

How big is the Opportunity in the U.S.?

The U.S. accounted for nearly 90% of the wrinkle release sprays market in North America. Sales in the country have remained consistent without reporting much change. Due to current trade war equation with China, and the impact of COVID-19, purchasers are looking at ‘Made in US’ wrinkle release spray solutions with a renewed interest.

Considering the circumstances in 2019, many retailers started taking proactive approach to reduce their dependency on foreign imports. However, the fact being that domestic products are expensive and the cost is eventually passed on to the purchaser could have negative impact. As per FMI’s analysis, wrinkle release spray will continue to be the popular choice in the U.S., with the rising demand of hassle free fabric care.

The U.K. wrinkle release spray market has been expanding at a steady pace. The demand for low-cost mass options is growing at a higher rate than demand for premium sprays. The pandemic also influenced consumer behavior in terms of social distancing, as most consumers are buying the products through online mode of sales channel, which give them an option to choose from a wide range of brands in online platform.

Online sales channels also help them in comparing the feature and price of the products. Overall, the sales of wrinkle release spray in the U.K. are poised to recover, however, reaching pre-COVID-19 pandemic status will depend on a host of macro-factors, most notably consumer confidence and trade scenario.

What is Germany’s Contribution to Wrinkle Release Spray Market?

As it is in case with many European countries, environmental regulations heavily influence the manufacturing process of wrinkle release sprays in Germany. Considering the nature of daily usage of the product, the price range plays vital role especially since consumers in Germany continue to shift from one brand to another.

What are the Opportunities for Wrinkle Release Spray Manufacturers in China?

Among countries in the East Asia, China accounted for of almost half in East Asia market in terms of revenue in 2019, followed by South Korea and Japan. The expansion of consumer goods sector will remain a chief driver of the market. Besides this, sales will be backed by the country’s solid hospitality and tourism sector.

The scented wrinkle release spray segment is anticipated to grow at a CAGR of 3.6% during 2020-2030. This segment is expected to show continuous growth and account for three fourth of value share over the forecast period. It is expected to gain from continuous development in fabric care industry and launch of innovative range of scented wrinkle release sprays.

Hypermarkets and supermarkets have emerged as highly effective sales channels for the wrinkle release spray sales. They are expected to continue dominating the market through the forecast period. According to FMI, in terms of price-range, these sales channels will register higher demand for mass products. 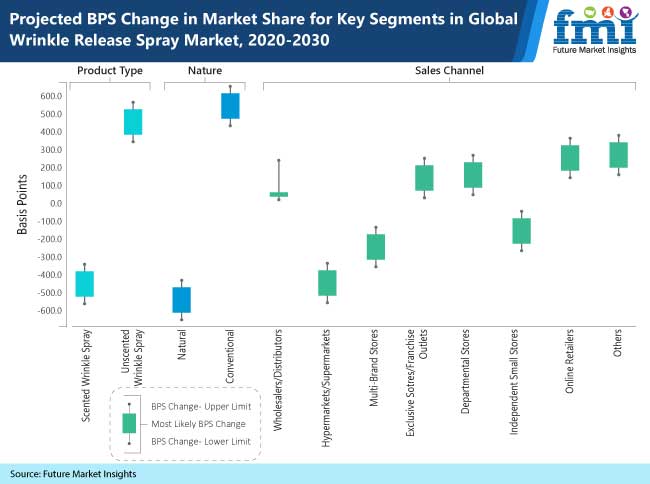 The global wrinkle release spray market is quite fragmented exhibiting the presence of a large number of players. Companies operating in the market are focusing on expanding their online presence. Besides this, the market has been showcasing considerable investment towards product launches.

FMI follows a methodology that encompasses demand-side assessment of the market and triangulates the same through supply-side analysis. This methodology is based on the use of standard market structure, methods, and definitions. Request detailed methodology