Zeolites are micro porous crystalline solid structures made of aluminum, silicon and oxygen that form a tetragonal framework with cavities wherein cations such as water, sulfur and other small molecules may reside. Zeolites are also known as molecular sieves. Generally, zeolites are of two types: natural zeolites and synthetic zeolites. Around 232 unique zeolite frameworks have been identified and over 40 frameworks of zeolites are known.

Synthetic zeolites are predominantly used as detergent builders and absorbents and catalysts. Natural zeolites, on the other hand, find applications in soil amendment, feed additives, water treatment and construction, among others. The core components of detergents are surfactants, builders, bleaching agents, enzymes and special additives, among others. In detergents, zeolites are used as builders to improve the performance of surfactants and other detergent additives by softening the water through the ion exchange process.

Thus, stringent regulations regarding the use of phosphate compounds in detergents is, in turn, expected to drive the zeolite market. Moreover, growing demand for powder detergents across the globe wherein zeolites are prevalently used as builder (around 20-30% by volume) will, in turn, help to drive the zeolites for detergent market. With growing economic prosperity and increasing purchasing power, people are moving towards the use of products that were earlier unaffordable.

This, in turn, has resulted in increased demand for consumer products, such as personal care and home care products, among others. This consumer market growth, in developing regions, will help to drive the raw material market, such as the market for zeolites, surfactants, solvents and additives. Thus, rising disposable income in developing regions will drive the zeolites market over the forecast period.

Zeolite A is expected to gain significant traction among product types

On the basis of product type, Zeolite A segment accounted for more than 80% value share in 2018. Growing demand for zeolite 4A in detergents across the globe, especially in China and Europe, will help to drive the Zeolite A market during the forecast period. 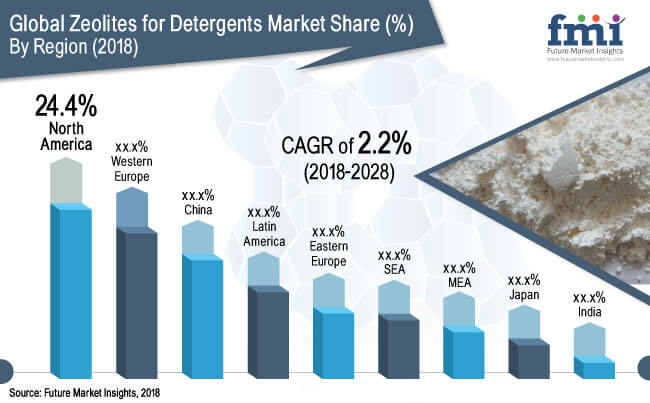 Europe dominates the global market; India and China tipped to be high growth markets by the end of the forecast period