Aloe vera is a moist plant species of the genus aloe. It basically grows in tropical climatic conditions in various countries across the globe. Aloe vera is generally cultivated for food, cosmetics and medicinal uses. Aloe vera leaves comprise phytochemicals under study for possible bioactivity, such as acetylated mannans, polymannans, anthraquinone C-glycosides, anthrones, other anthraquinones such as emodin and various lectins. Aloe vera extracts find wide application in the food, pharmaceutical and cosmetics industry.

The extracts are used to formulate aloe vera based products such as powders, gels, capsules, drinks and concentrates. Aloe vera is known to alleviate skin related ailments, cardiovascular diseases, weight loss and many more. Owing to these factors, consumption of aloe vera among consumers across the world has been on the rise.

In this report, the aloe vera extracts market is segmented on the basis of form into: concentrates, gels, powders, capsules and drinks. In 2015, among all these segments, the drinks segment accounted for largest value share in the global market.

Segmentation, by End Use Industry

On the basis of end use industry, the global aloe vera extracts market is segmented into food, pharmaceutical and cosmetics segments. Among these segments, the cosmetics segment dominated the overall market in terms of value in 2015, which is expected to expand at a CAGR of 7.7% over the forecast period. 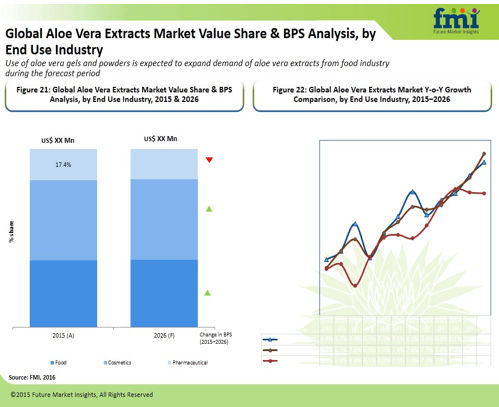 On the basis of geography, the global edible nuts market is segmented into seven major regions - North America, Western Europe, Asia Pacific Excluding Japan (APEJ), Japan, Eastern Europe, Latin America and the Middle East & Africa (MEA). Of these various markets in these regions, Asia Pacific is expected to witness favorable growth in terms of volume and value over the forecast period. In terms of value, the Western Europe market is expected to account for a major share of the market over the forecast period. 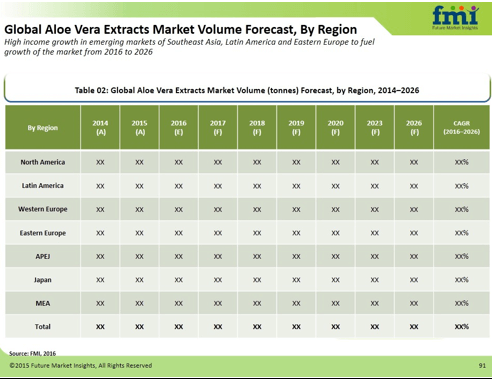