Beverage acidulants are widely used in the beverage processing industry as additives, preservatives, and flavoring agents. Owing to the widespread use and growing demand for high-quality beverages, the safety of the finished product is critical. Supported by approval from various regulating authorities for the use of acidulants in different drinks, beverage acidulants are gaining significant traction.

Citric acid is derived from limes and lemons, but is now produced commercially through a fermentation process. Phosphoric acid-based beverage acidulants are the second-most used acidulants in the beverage industry. The major end-product in which these are used are cola drinks. Cola drinks are envisaged to be the best-selling flavored soft drinks, globally. These have a harsh, biting taste that complements the flavor of the cola.

On the basis of application, the beverage acidulants market is segregated into soft drinks, dairy-based beverages, fruit juices and concentrates, alcoholic beverages, and energy drinks. The segment which seems relatively sturdier over the forecast period is the fruit juices and concentrates beverages segment. It is expected to maintain its high share in the beverage acidulants market over the forecast period, though, the growth rate at which it is expanding is relatively moderate.

Various beverage manufacturers are focused on providing different beverages at an optimum cost, owing to high demand from consumers. In view of the same, multiple companies have implemented the integrated production approach to deliver cost-effective beverages. Beverage acidulants provide a cost-effective solution in the production of various beverages, including soft drinks, cola drinks, and more. 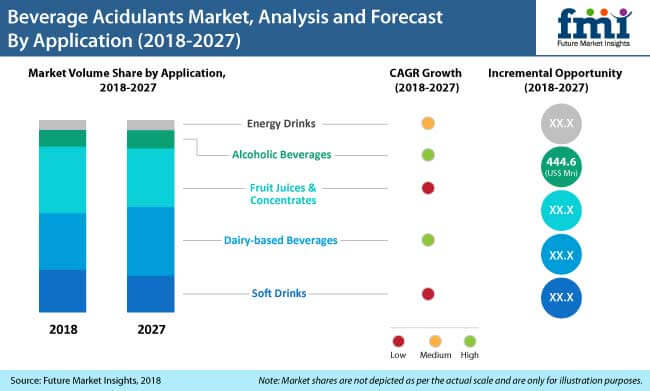 An increasing number of consumers are aware of the need for a healthy regime. Organic beverage acidulants such as citric acid-based beverage acidulants are widely used in beverages as additives, since they are naturally-derived preservatives. They are naturally present in almost all citrus fruits. Owing to the increasing awareness about the harmful and ill-effects of synthetic and non-natural acids, consumers are increasingly shifting towards beverages that contain naturally-derived ingredients.

One of the primary factors anticipated to boost the beverage acidulants market across the globe is the expansion of the beverage processing industry in various developing and less-developed countries.

In countries with a rapidly increasing urban population such as India, China, and Brazil, and regions such as the Middle East, the demand for processed beverages is growing significantly. This is attributed to increasing product visibility, adoption of retail formats, and launch of new and more beneficial products, owing to naturally-derived ingredients that offer various health benefits to consumers.

Beverage Acidulants Give an Enhanced Flavor and Shelf Life to Beverages