An Incisive, In-depth Analysis on the Bagging Equipment Market

This study offers a comprehensive, 360 degree analysis on the Bagging Equipment market, bringing to fore insights that can help stakeholders identify the opportunities as well as challenges. It tracks the global Bagging Equipment market across key regions, and offers in-depth commentary and accurate quantitative insights. The study also includes incisive competitive landscape analysis, and provides key recommendations to market players on winning imperatives and successful strategies.

Bagging equipment can either use horizontal or vertical orientation, depending upon the application. Vertical baggers are capable of handling multiple bagging styles, which has made them more popular among brand owners. By capacity, the 1001 - 2000 bags/hour segment remains a prominent segment in the bagging equipment market, as most automatic as well as semi-automatic machines can process at this speed.

In terms of trade, the top import destinations for bagging equipment include Germany, Italy, China, the U.S., Switzerland, and Spain, while export destinations include a large number of developing countries, which include Bangladesh, India, the UAE, Saudi Arabia, South Africa, and Ghana, among others. 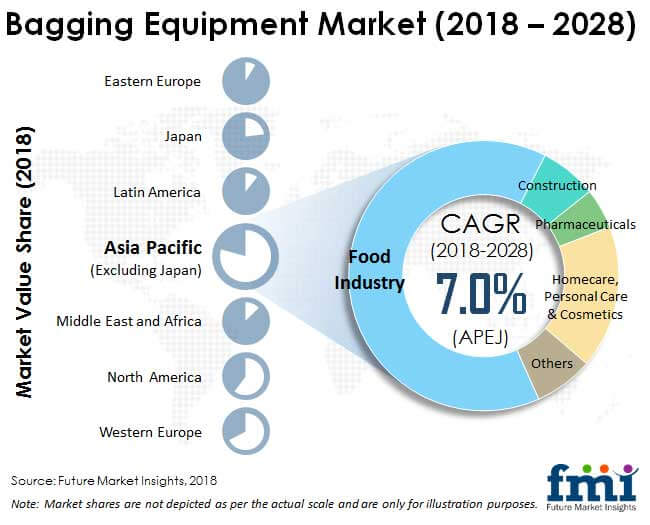 Standalone Bagging Machines Hold over Half the Market Value Share

Given the characteristics of the market, we have triangulated the outcome on the basis of three different types of analysis based on supply side, downstream industry demand for bagging equipment, and the economic envelope. In addition, it is imperative to note that, in an ever-fluctuating global economy, we not only conduct forecasts in terms of CAGR, but also analyse the market based on key parameters such as Y-o-Y growth rates to understand the predictability of the bagging equipment market and identify the right opportunities for players.