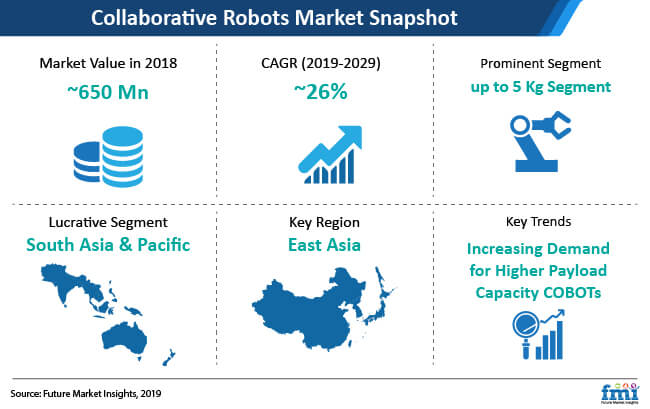 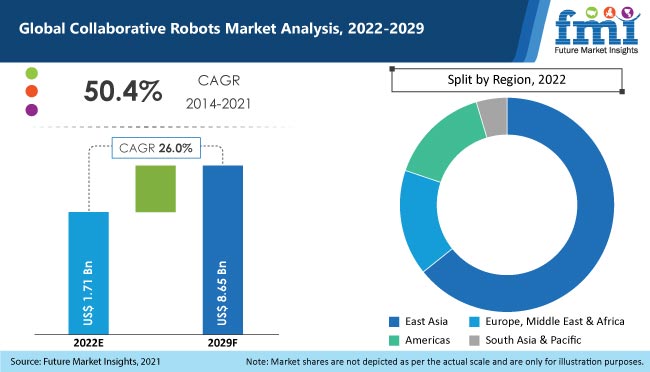 As the ‘fourth industrial revolution’ sets to take the entire supply chain by storm, companies are making rapid strides to increase productivity and improve resource utilization through integration of highly advanced technologies, without neglecting the human workforce. A range of manufacturing technologies that fuse physical and digital worlds with breakthroughs in Artificial Intelligence (AI), Internet of Things (IoT), industrial robotics, and 3D printing are seen as the main drivers of Industry 4.0.

Additionally, in the ongoing industrial transformation journey, robots are moving from behind fixed and caged locations to work stations alongside human workers. Conventional industrial robots that move with great force have for long been used in several work operations until recently, following the rise of collaborative robots or ‘cobots’.

Today, robotics have become an unstoppable phenomenon. Equipped with powerful onboard computers, multiple advanced sensors, and reliable EOATs, collaborative robots are gaining strong momentum for their versatility, user-friendliness, affordability, and small footprint – much beyond the innate Industry 4.0 compatibility.

Moreover, a number of technologies are taking collaborative robots to new heights, which may come with extensive interactive features to enable recognition of voice commands and more seamless collaboration with human workforce, or be intelligent enough to move away from programmed instructions.

The rapid revolution of industries is bringing a paradigm shift in businesses, economy, and society. Tremendous changes in the automotive industry, in line with growing desire for enhanced driving experience, improved in-car ambience, and reduced carbon emissions, have promoted the adoption of new technologies to not only accelerate the production pace but also to enable the manufacturing of precise products.

Benefiting from a strong desire for advanced automation technologies, collaborative robots have been witnessing a spike in popularity in the automotive industry. The manufacturing industry in particular, is turning to such robotic technology to compete in response to shrinking labor pools as labor costs increase and baby boomers age.

As e-commerce industry continues to move on an upward swing, the demand for warehouse workers are inevitably exceeding the labor supply, creating an increasing need for automation. The digital transformation of warehouses is thus likely to present tremendous market opportunities for collaborative robots manufacturers. IoT and robotics, including cobots, are further ready to play a significant role in the health care settings.

In an attempt to improve patient-centricity in hospitals and create a better workforce conditions, the healthcare industry is highly likely to move into cobot space, given the enhanced mobility and lightweight nature.

East Asia is leading the explosion of collaborative robots market, as countries such as Japan and China are experiencing an intense transition to new era of automation, endeavoring to break their reliance on foreign technology. With a rapid increase in demand and the emergence of numerous startups, China is likely to lay the foundations of a collaborative robots-oriented investment model.

While the Chinese market is on a right path to get closure to its maturity, the collaborative robots are ready to shape the future of manufacturing in India. Additionally, European countries, the pioneers in robotic technologies, continue to offer greater opportunities, due to strong presence of frontrunners of the market and sheer scale of robot dominance across industries.

The future of collaborative robots will ride on their applicability in large industries as well as SMEs. Cobots are beginning to play a major role in small and mid-sized businesses that might not have been able to leverage high-end industrial robots to start automating their processes. New possibilities have also been put in front of entrepreneurs and relatively small businesses, aiming to automatize their production processes, material handling, and storage.

Unlike the robots of the past, collaborative robots are state-of-the-art tools in the hands of manufacturers to produce quickly and cost-effectively, while addressing most pressing problems.

In the new era of disruptive innovations that will make factories smarter than ever, manufacturers are joining the race with massive investments and robust R&D activities that will radically change the collaborative robots of the future. Although these robots will considerably improve worker’s productivity, factories will require much fewer and more skilled workers to operate, creating a significant technological gap and unskilled labors losing their reliance on massive job creation provided by the manufacturing sector. In addition, the elimination of safety fences in robotic operations will create a need for strict safety regulations.

The greater awareness at SMEs and the wider adoption by major OEMs have compelled mainstream traditional industrial robots vendors to market their own collaborative robots. To maintain their strong hold in the market, leading stakeholders are focusing on broadening the scope of collaborative robots by introducing a wider range of products.

As the new reality of humans working alongside robots becomes the standard of enhanced performance and improved productivity, the future of collaborative robots looks promising. With a wealth of technological innovation on the horizon, these robots are likely to advance as deep leaning techniques and advanced vision systems which can be integrated into extensive range of applications.