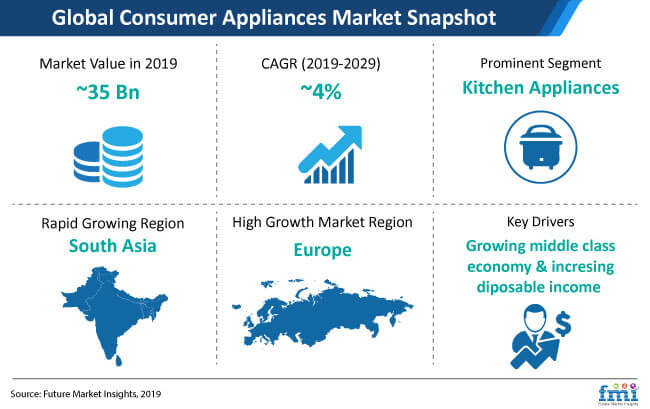 According to the findings of an independent report, food preparation equipment accounts for around 30% of the restaurant’s energy bill. Rising energy costs resulted in the growing consumer demand for energy star-labelled equipment. Governments of several countries are promoting green technologies, by offering schemes such as tax credit programs.

The growing awareness regarding green technologies among consumers is anticipated to lead to the rapid replacement of conventional foodservice equipment over the next few years. The trend is expected to be prominent among developing regions of Asia Pacific and Latin America. 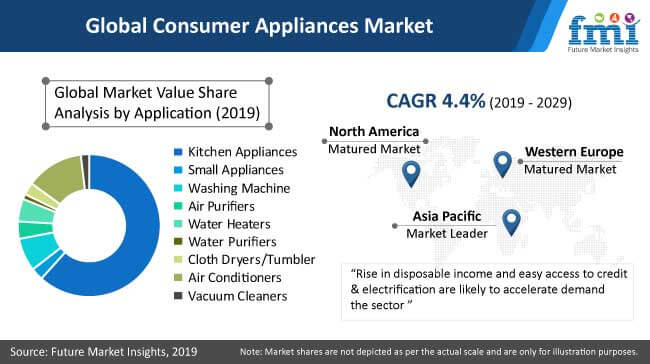 Growing Demand for Smart Appliances Owing to its Several Advantages

The AHAM (Association of Home Appliance Manufacturers) defines smart appliances as appliances that monitor, control, and protect their electrical energy usage in response to customer needs. The appliance control and interface software might enable appliances to participate in demand response and time-based rate programs with the local utility.

Energy-saving is a significant feature in smart home appliances. For example, a refrigerator could be easily (or automatically) switched into “vacation mode,” suspending the ice maker and auto-defrost feature until the user returns.

Smart appliances have several advantages, such as low energy consumption, improved efficiency and productivity, reduction in time consumption, and others, which drives the demand for home appliances in several regions.

Rising Living Standards to Drive the Demand for Appliances

Mega trends of the increasing middleclass population in emerging economies are observed around the world, which drives the standard of living. Thus, with the growing preference to buying electronic household appliances and changing living standards of consumers, the demand for washing appliances and domestic food preparation applicances is highly likely to witness an upsurge in the near future.

With the increasing disposable income, manufacturers are expected to foresee upheaving sales in the consumer appliances market during the forecast period. Thus, for consistent growth in the sales volume, appliance manufacturers are focusing on developing products at commercial level and manipulate average selling prices to reach middle class consumers around the world.

Wide Usability of Online Sales to Boost the Market Growth

In today’s world, the online sales is growing exponentially in several segments, especially in the appliances segment, creating more opportunities for the market across the globe.

The online sales channel holds a significant amount of share in the global consumer appliances market owing to the improved connectivity, technological advancement, infrastructure development, government initiatives towards digitization, and other factors.

Deeper understanding of the market trends and preferential shifts of end-use segments across several regions are likely to create a bottleneck for prominent players, considering forward to untapped opportunities in the consumer appliances market.

Consumer Appliances - More Connected and Intelligent than Ever

Smart technologies are gradually taking control of homes and lifestyles, and their adoption is on the rise, backed by high functionality and convenience. As the quest for smarter lives escalates and the world moves towards artificial intelligence (AI) and 5th generation of wireless technology, consumer appliance manufacturers are embracing changes and becoming agile innovators.

Keeping the core functionalities intact, manufacturers are moving away from ‘one-size-fits-all’ approach to futuristic technologies to develop appliances that can be controlled remotely or products that can self-diagnose any issues.

Fridges with cooking management system, washing machines equipped with voice control systems, and small appliances with connected and intelligent features are steadily gaining traction. In addition, manufacturers are putting significant emphasis on ‘sustainability’ as an important add-on to their marketing strategies. Future Market Insights (FMI), in its new offering, brings to fore credible insights on the ‘Consumer Appliances Market’ that can arm stakeholders with necessary information to take critical decisions with clarity.

The consumer appliances market remains primarily driven by mass urbanization along with rising standard of living among consumers. Additionally, keeping up with current trends and reinventing traditional technologies to suit the needs of today’s consumers have been essential for manufacturers. With rapid advancements in automation and IoT, consumers are inviting smart technologies into their homes at an unprecedented rate.

An increase in stringent government regulations to reduce power consumption by consumer appliances has also been parallel to the development of high quality products with energy-saving features. However, rapid upgrades in regulations set by EU (European Union) and EPA (Environmental Protection Act) remain a key challenge for market players to meet quality and energy efficiency standards.

In addition, intelligent appliances tend to collect massive information related to habits and preferences of a households, thereby raising concerns regarding privacy violations and confidentiality breaches.

Many fast-growing economies in Asia Pacific have made significant policy changes that have made regulatory and business environment more conducive. The low penetration of consumer appliances in the region promises substantial opportunities for foreign players to tap into.

Although North America currently leads in terms of global revenues, the world order is likely to be changed during the next decade, with massive sales in China and India pushing Asia Pacific to numero uno. Gains are also likely to be handsome in ASEAN, where the rise of a middle class demographic will create the platform for increased sales.

Consumer appliances of the future are envisaged to be multi-functional that will not only be inter-connected but also interact with each other, owing to novel technologies such as IoT. Promising growth in consumer appliances market goes in hand with constant development in residential sector with a mission to advance consumers’ lifestyles.

As the idea of living in a smart home is appealing to a large number of consumers, most new appliances are connected to the internet, and consequently the regulatory framework for these products is rapidly evolving. Therefore, manufacturers will need to gain a deeper understanding of data ownership and ensure a high degree of product safety and security.

International market players are attracted to developing countries where fast-growing urbanization and rising consumer spending have significantly influenced the penetration of home appliances, ranging from refrigerators to hair dryers.

However, strong presence of regional players, especially those from China, India and South Korea will continue to represent a challenge to the expansion of former players. Regional as well as local players are further localizing the appliances or rallying around products that are fit for specific consumers’ lifestyles.

Consumer Appliances Market - The Road Ahead

Managing personal well-being and lifestyle, home automation, and saving time and energy now spread across products such as kitchen appliances, air and water purifiers, vacuum cleaners and others. Therefore, consumer purchases of traditional as well as smart technologies have been showcasing its rise in recent years.

As the consciousness of the need to protect the environment and ensure a sustainable future has been escalating across the globe, consumer appliances manufacturers are continuously working on reducing the impact of production processes and the consumption of energy.

Stakeholders are further placing their focus on emerging technologies to add new value to their products and gain higher consumer satisfaction. With increasing homes which use digitally controlled appliances in developed regions and government initiatives to electrify rural areas, market stakeholders should be looking at a period of sustained demand.