2021 Analysis and Review: Deblistering Machines Market by Automation – Automatic, Semi-automatic, and Manual for 2021 – 2031

How Historical and Future Outlook for Deblistering Machines Market Match Up?

The demand for highly efficient deblistering machines for secure and safe removal of tablet and capsules from blister packs considerably surged in the last few years and is projected to remain high through the forecast period.

Furthermore, deblistering machines with adjustable tooling and easy changeovers are gaining significant traction in the global pharmaceutical market. The rising demand from recyclers and pharmaceutical manufacturers as they seek to upgrade infrastructure will aid the overall growth of the market. According to FMI’s analysis, deblistering machine sales are estimated to grow at 4.8% CAGR between 2021 and 2031.

What is the Impact of Rising Manufacturing Output on the Market?

Furthermore, this growth is not just limited to markets of North America and Europe, but also in rapidly witnessed in markets in Asia. As per the European Federation of Pharmaceutical Industries and Associations, the global pharmaceutical market was valued at US$ 1.1 trillion in 2020. Also, rapidly rising research and development activities in the pharmaceutical industry has expedited clinical trials and lab research on a large scale, which will fuel sales of deblistering machines to a significant extent.

The rising manufacturing output in research and development in the global pharmaceutical sector is anticipated to offer an ample amount of growth opportunities for manufacturers to proliferate the market further during the forecast period.

How is Shifting Inclination towards Automation Driving Deblistering Machines Market?

Nowadays, manufacturers operating in different industries, including pharmaceuticals are focusing more on enhancing the overall manufacturing efficiency with scheduled timings. Incorporation of advance and highly automated packaging as well as other machines in manufacturing plants save time and facilitates the overall packaging and deblistering process. Manufacturers are also preferring these automated machines including deblistering machines to reduce the unnecessary labor cost and speed up the deblistering process to meet the targets.

How will Demand in India and China Impact Growth?

China and India have experienced a major transition through industrial revolutions in the past 5 years which is likely to continue in the years to come. Deblistering machine manufacturers operating in the Europe and the U.S. markets have significant opportunities to expand their business network and boundaries in South and East Asian regions. Factors such as low labor, production, and raw component cost in Asian countries have pushed manufacturers across the globe to expand their manufacturing facilities to countries in the Asian region, which enables Asia to emerge as a global manufacturing hub.

Furthermore, being one of the largest drug/medicine producers and exporters, Asian countries are likely to offer strong demand for deblistering machines during the forecast period. Considering all these factors, leading manufacturers operating in the global deblistering machines market can target Asia to maximize their sales and financial profitability.

One of the major patterns observed in the global packaging machinery market is the export of machines from countries in Europe and the U.S. These countries generate significant revenue through sales of packaging and other machinery on a global scale. In the near future, Asian countries are going to become the manufacturing hub for machinery producers, owing to low production costs.

However, imports have become one of the major issues for these companies due to high customs duties and various taxes imposed on the machinery imported from other countries. It should be noted that most of the companies present in emerging economies are small-scale manufacturers and it is very difficult for them to afford high-cost machinery. This factor somehow hinders the deblistering machines market growth to a certain extent.

What Opportunities are the Indian Pharmaceutical Industry Offering?

As per the India Brand Equity Foundation (IBEF), the Indian pharmaceutical industry supplies over 40% of the global demand of generic drugs. Also, as per a national economic survey, the Indian pharmaceutical industry is projected to expand by 3 times during the next decade. All these factors couple with rising research and development in healthcare is estimated to offer ample opportunities to the manufacturers to raise their sales of deblistering machines in the country.

Why is the U.S. a Leading Revenue Generator for Manufacturers?

As per FMI analysis, the U.S. is estimated to generate significant demand for deblistering machines during the years ahead. This profit-making trend can be broadly attributed to the high preference for technological automation in pharmaceutical sector in United States.

Rising research and development coupled with product maximization from these companies in the United States is creating massive demand for packaging infrastructure including deblistering machines. This high demand for machineries and high spending levels on it by pharmaceutical manufacturers in United States is projected to uplift demand.

How are Investment in the German Pharmaceutical Sector Fueling Sales?

The research based German pharmaceutical industry is increasingly inclined towards the launch of new drugs in addition to the extension of product pipelines. Strong capital investments in drug development are redefining the growth of the pharmaceutical market in the country.

The growing volume of production for such drug offerings in the form of tablets and capsules has offered significant demand for deblistering machines and is projected to fuel sales in Germany.

How are Cost Factors in China Influencing Production Rates?

The Chinese packaging industry is known globally for its low cost of production with a high manufacturing rate. Factors such as easy availability of raw materials and components, affordable pricing of machines installation, and low labor and material cost in China makes it a manufacturing hub especially for small scale entrants in the market.

Deblistering machine manufacturers operating in the Chinese market are maximizing production levels supported by low initial investment and production cost. These manufacturers are attracting a major portion of the pharmaceutical end users with their affordable offerings. In addition, rapid penetration of healthcare and pharmaceutical industries in China is inducing a positive impact on the sales of deblistering machines.

How are Pharmaceutical Imports in Italy Aiding Market Growth?

The Italian deblistering machines market is notably driven by the demand generated from the regional pharmaceutical industry. Rising pharmaceutical spending by individuals and demand for oral form drugs has strengthened the Italian pharmaceutical market. Rising consumption and demand of medicinal drugs has led the country to import medicines on a large scale.

As per the European Federation of Pharmaceutical Industries and Associations (EFPIA), the total pharmaceutical drug import of Italy in 2019 was worth of US$ 30,876 Mn which is higher than other leading European countries such as Russia, Spain, Poland and others. This rising import of drugs in Italy creates considerable demand for packaging as well as deblistering machines which will further accelerate the market growth of deblistering machines in the market.

How is Automation in Deblistering Machines Influencing Sales?

With its superior deblistering speed, automatic deblistering machines are witnessing consistent demand in the market, with a CAGR of over 5%. The ability of automatic deblistering machines to safely separate out medicines from blister packs at a rapid pace makes them popular and preferable among the end users. Because of its growing demand, the target segment is anticipated to expand by 1.7 times to its value during the forecast period. Semi-automatic and manual variants will continue to attract buyers owing to relatively lower purchase costs. 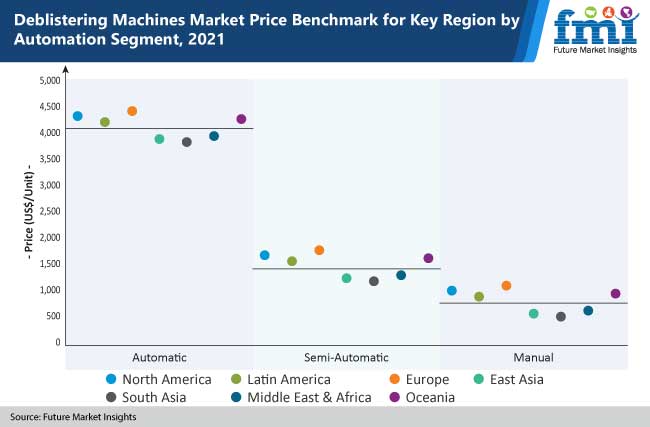 How are 40 to 80 BPM Deblistering Machines Set to Fare?

The demand can largely be attributed to cost benefits in comparison to machines running at over 80 BPM. The target segment is projected to hold approximately 45% of the market share through the end of 2031.

Which End Users are Key to Revenue Generation?

Established as well as newer manufacturers of deblistering machines across the continents are focusing on pharmaceutical and contract manufacturers and their requirements to solidify sales figures.

Collectively, these segments are holding a mammoth share of over 65% in the market while also projecting to offer total incremental opportunity of US$ ~67 Mn during the forecast period.

Furthermore, SEPHA has unveiled a new range of deblistering machines with features such as automatic feed and improved user interface with fault indicators, easy tooling changeover, and variable speed up to 60 blisters per minute.