The Digital mobile X-Ray devices segment's revenue is predicted to expand 2.0x with an attractiveness score of 1.8, through 2026.

Through 2026 digital mobile X-ray machines will continue to dominate in hospitals and radiology centres across the world, collectively accounts for 70% of the market's revenue share.

APEJ is the emerging region of the market followed by India and China.

The high cost associated with the clinical trial process has been preventing mobile X-Ray device manufacturers to reach the stage of development, which is necessary to attract major original equipment manufacturers. In the case of diagnostic imaging equipment, clinical trials ideally should be conducted one year prior to the product launch.

However, due to the regulatory restrictions, it has become difficult for manufacturers to conduct early stage trials and establish partnerships with local players. For instance, GE Healthcare used to conduct many clinical trials in Canada and had to shut many of its local operations due to the stringent government regulations. Stringent regulatory and product approval policies are expected to hinder the development of the Mobile X-Ray segment.

However, the scenario is the contrast in some of the developing and underdeveloped economies. These economies lack widespread access to diagnostic imaging. In addition, high costs involved in the initial setup and installation of advanced imaging equipment and broadband technology in remote locations is one of the factors that could hamper the growth of the Mobile X-Ray segment.

The usage of medical imaging in the U.S. has increased dramatically over the last decade. Usage of diagnostic imaging devices has been the highest in the U.S. as compared to all OECD member nations. This has led to medical imaging emerging as the highest contributor to U.S. health care expenditure. As a result, certain reductions in Medicare payments have been observed in the last decade. Awareness of the superfluous usage of medical imaging has grown among physicians, and patients are increasingly becoming aware of the radiation hazards.

Overall, the effect of these factors has been evident on the Mobile X-Ray device segment in the U.S. and thus, growth in the region has declined. Moreover, the U.S. is the trendsetter in major parts of the market, hence this effect could also trickle down to the other major markets. 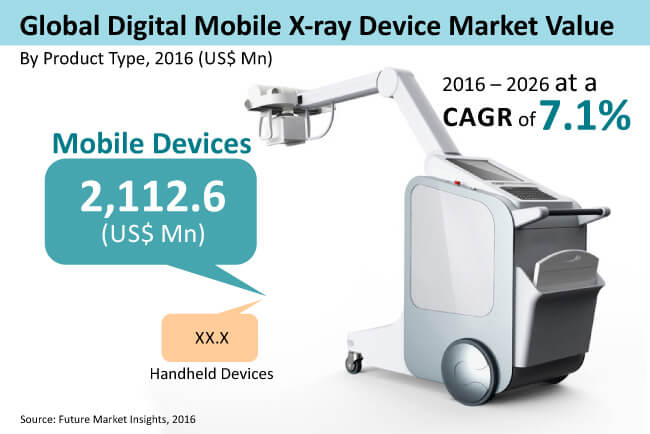 Key segments covered in this report

What is the outlook of the digital mobile x-ray devices market?

The digital mobile x-ray devices market is likely to grow at a CAGR of 7.1% through 2026.

Which are the leading companies in the digital mobile x-ray devices market?