The flavour capsule cigarette market size is expected to surpass US$ 1.6 Bn in 2021, as per latest insights by Future Market Insights (FMI). Surge in sales is expected as cigarette consumption continues increasing on a global scale. Against this backdrop, FMI projects positive flavour capsule market demand outlook. Between 2021 and 2031, the market is forecast to rise at a CAGR of 13.1%.

The market exhibited impressive 11.7% year-on-year growth between 2020 and 2021. Growth is anticipated to remain healthy, with the market surpassing US$ 5.5 Bn in valuation by 2031. Menthol flavour capsule cigarettes will emerge as top-selling product, accounting for over 51% of revenue generated in the market through 2031.

The market for flavour capsule cigarettes has recorded strong growth globally during 2016-20 with at a CAGR of 8.9%. It is further expected to grow at a CAGR of 11.6% during the forecast period of 2021-31.

Political factors determine the extent to which a government influences restrictions on tobacco products. However, legal factors include both internal and external aspects including consumer laws, safety standards, and the labour laws.

For instance; there is a positive, accelerating international trend to ban menthol capsules and flavours in tobacco products which could potentially hinder growth in the market. 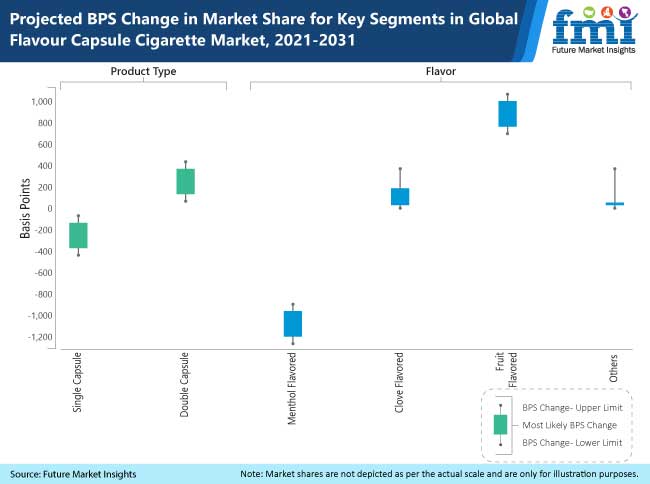 Cigarette smokers, both occasional and frequent, are shifting to dual pill flavouring tobacco products to enjoy a more personalised experience. Dual pills are incorporated in carbon or tube filters. Devices having two pills provide customers with a greater flavour profile by letting them to burst once for either of the flavours or twice for a mixture of both flavours.

Nevertheless, double flavour capsule cigarettes are said to produce more nicotine, carbon monoxide, and tar than traditional cigarettes. Furthermore, the double capsule flavour cigarettes last longer, rising the chances of severe lung infections by approximately 20 times. This is likely to hold back sales in the long-term.

How are Smoking and Stress Related Beliefs Affecting Market Revenue?

People often smoke as a form of ‘self-medication' to alleviate stress. However, studies have shown that smoking tends to increase anxiety and tension in the long-term. Relief from smoking is fleeting and is often followed by withdrawal symptoms and increased cravings.

Adults who are depressed are twice as likely to smoke. Nicotine causes the chemical dopamine to be released in the brain. However, smoking causes the brain to turn off its own mechanism for producing dopamine, resulting in a decrease in supply over time, which in turn prompts people to smoke more. Thus, such beliefs increase the frequency of smoking and consumption of flavour capsule cigarettes.

What is the Impact of the COVID-19 Crisis on the Flavour Capsule Cigarette Market?

The COVID-19 crisis will have long-term social, economic, and health consequences in the global market. The tobacco industry has not been severely impacted in most regional markets in the short term.

Increased tobacco tax by governments during and after the pandemic are likely to cause fluctuations, which will inevitably exacerbate the chronic consumer downturn. The perception for broad-scale societal health action, may drive additional legal constraints in certain markets.

Despite inadequate evidence smokers who are hospitalized for COVID-19 are expected to have a higher risk of severe outcomes than nonsmokers. Regardless, consumers continue to buy tobacco products according to British American Tobacco (BAT).

How Large is the Opportunity for Growth for Flavour Capsule Cigarettes in Chile?

Latin America is anticipated to remain one of the more attractive markets during the forecast period, according to Future Market Insights. According to the study, Chile is expected to account for over 24% of the Latin America market in year 2021.

The country is home to numerous manufacturers, and also holds a significant share of global smokers This factor is directly linked with frequency of smoking and consumption of capsule cigarettes products in Chile.

What are the Growth Prospects in the China Flavour Capsule Cigarette Market?

China is amongst the fastest emergent country in the East Asia region. By 2031, it is expected to account for over 42% of flavour capsule cigarette sales, supported by a vast consumer base.

Increasing popularity of flavored tobacco products, particularly among millennials in China is a prime reason driving sales in the region for the foreseeable future.

How is the U.S. Contributing to the Flavour Capsule Cigarette Market?

According to FMI analysis, the U.S. is expected to account for a dominant share in the North America market in the year 2021. More than 18.6 million people are current smokers of menthol cigarettes in the country.

Early Age smoking has grown tremendously in recent years especially in developed economies like the U.S. Along with this, per capita consumption and expenditure for nicotine-based products has also increased.

However, In April 2021, the FDA stated that it is planning to place a ban on tobacco merchandise in the following year including menthol as a characterizing flavour in cigarettes which can restrict the market growth in the region.

Why Does India Reflect Promising Growth for Flavour Capsule Cigarettes?

India accounts for around 19% of the value share in the South Asia flavour capsule cigarette market in year 2020 and expected to grow with compound annual growth rate of 11.5% over forested period.

India is home to a large young population who are a key target demographic for manufacturers. As a result, increasing consumption of cigarettes in India heightens the prospects of flavour capsule cigarettes in the region.

Why are Menthol Flavour Capsule Cigarettes Preferred by Consumers?

Young people who smoke menthol cigarettes are estimated to be 80% more likely than those who smoke conventional cigarettes to become lifelong smokers, which makes menthol dominant in the market.

Why Do Single Capsules Hold a Larger Market Share?

Single capsules are estimated to dominate and account for over 68% of the market by 2031. The innovation of capsule cigarettes has contributed to their increased attraction among customers, particularly among younger individuals.

Due to the physical response to bursting the capsule, the sound associated with the capsule popping, and the resulting shift in flavour and aroma, these items are also considered to have multimodal appeal. It has been deemed desirable that smokers had the ability to adjust their sensory experience at their leisure.

Which Product Price Range Holds the Lead in the Flavoured Capsule Cigarette Market?

The economy price range segment is expected to dominate the market and account for over 72% of the market by 2021.

Economy segments accounts for a larger share in the market owing to higher appeal among the low- and middle-class consumer demographic. Also, most new smokers are young, which is especially true in price sensitive countries.

Why is Indirect Sales the Fastest Growing Distribution Channel?

The indirect sales segment is expected to contribute revenue share of more than 66% in the year 2021 and is expected to grow with a compound annual growth of 11.8%.

Increasing number of supermarkets and hypermarkets is key reason for growth of this segment. The extensive reach of online platforms with convenient payment methods in developed and developing countries is likely to boost indirect sales in the near future.

Key brands are focusing on launching innovative flavoured capsule cigarette products in addition to concentrating on acquisitions and mergers of brands to increase geographical presence and production capacity.

Top Manufactures are continuing to leverage consumer experience and the maturity of a very broad product line to offer consumers a wide assortment of products to choose from. The market is highly dependent on factors such as an economic recession, direct or indirect taxation or tightened budgets, which can directly impact the traditional space.

In June 2021, Poda Lifestyle and Wellness Ltd. revealed its patent-protected Heat-Not-Burn system for capsule cigarettes, to eliminate the need for cleaning by smokers.

Japanese Tobacco revealed sales of cigarettes in Europe, which contain a weak menthol flavor to circumvent the ban imposed on flavored cigarettes by the European Commission in May 2020.

Key Questions Answered in the Report?