Escalation in disposable income has transformed consumers’ buying and spending trend majorly in urban areas of the country. Consumption of gin amongst the youth population across the country along with changing spending pattern has provided robust stimulus for growth in gin market revenue in the country.

Besides this, growing prominence of the bar and cocktail culture in urban cities and the advent of novel food and beverage culture is anticipated to catalyse growth of the India gin market over the forecast period.

Revenue from the India gin market is anticipated to expand at a normal CAGR during the forecast period, mainly driven by the growth of the overall IMFL segment coupled with robust demand for white spirits. Besides this, the trends that follow with growth of the gin market include rise in mergers and acquisitions, emphasis on promotional expenses, and the premiumisation of products in the country. 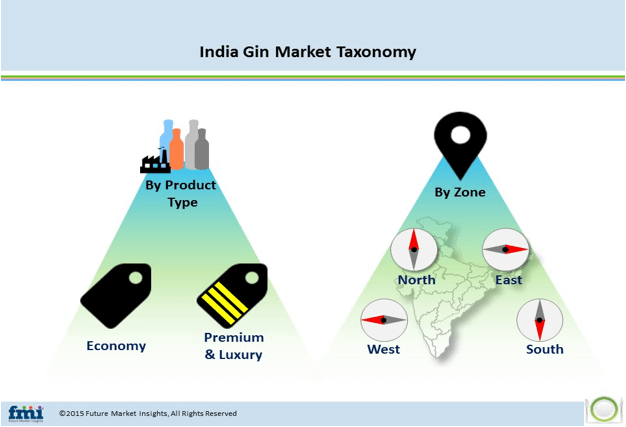 The India gin market has been segmented on the basis of product type into premium & luxury and economy segments. The economy segment is estimated to account for maximum share of the overall gin market both in terms of volume and value by 2015 end, and register significant CAGRs in these terms over the forecast period.

The premium & luxury segment is anticipated to exhibit a slight incline in contribution in terms of both value and volume due to increasing premiumisation of products by gin manufacturers in the country.

The India gin market has been segmented on the basis of regions, namely North, East, West and South. Out of all the regions, Southern India estimated to account for 34.8% in the India gin market (volume terms) in 2015, followed by the Western region with 28.2% during the same period.

Eastern region volume share is anticipated to increase from 12.4% in 2015 to 12.9% in 2025. Gin manufacturers are expected to expand their business in the Eastern region through tie-ups with regional distributors in the next few years. 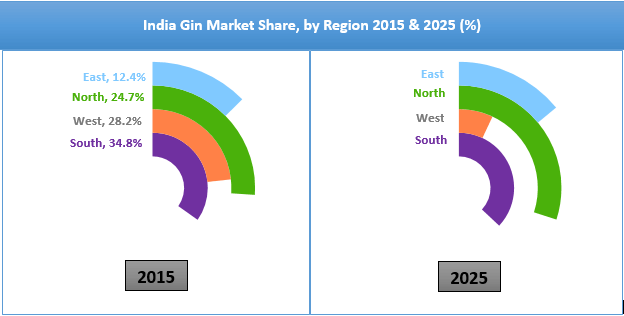 Geographical expansion, innovations and investment in research and development as well as mergers and acquisitions are some of the major strategies followed by key players operating in the India gin market to outperform competitors.