The market for Hepatitis B Diagnostic Tests witnessed a massive slowdown in its progress as a result of the spread of Covid-19 pandemic across the globe. But in the post covid world, the increasing demand for pork by the people who are home-bound directly boosts the pork industry to produce more pork that is disease free, to enable the pork industry to meet the increasing demand for pork in the global market. As recovery commences in 2021, major players are recuperating their positions through production expansion, capacity utilizations and online selling in 2021 keeping in view the covid-19 norms.

For instance, Abbott recognized the critical need of eliminating HBV and announced the launch of Determine™ HBsAg 2,  the world's most sensitive rapid diagnostic test for the detection of hepatitis B surface antigen (HBsAg). The rapid test is highly sensitive and easy to use  and provides accurate diagnosis in just 15 minutes. The test performs exceedingly well in certain populations such as pregnant women as it is very important to reduce the HBV transmission from mother to child. Abbott’s portfolio consists of life changing technologies available for hepatitis testing and the company serves various communities especially living in the remote areas.

In terms of growth, the market in North America is anticipated to stay ahead at a promising revenue rate during the forecast period due to the increase in the hepatitis B cases due to the exposure to blood or body fluids of an infected person, reuse of injections, unscreened blood transfusion or sexual contact with an infected person. The other key regions augmenting the growth of the hepatitis B diagnostic test market are Asia Pacific excluding Japan, Europe, Latin America and MEA.

Hepatitis B is a potentially life threatening infection and has become a major healthcare problem all over the world. As per the data provided by WHO, an estimated 257 million people are living with hepatitis B viral infection. In the year 2015, hepatitis resulted in 887,000 deaths, mostly from complications such as hepatocellular carcinoma and cirrhosis. The prevalence of hepatitis B is highest in the Western Pacific and African regions where 6.2% and 6.1% respectively of the adult population is infected. Hepatitis B can cause chronic infection and pose a high risk of mortality. It is estimated that 80-90% of the infants infected with hepatitis B during first year of life develop chronic infections.

There is an increased prevalence of hepatitis B due to the exploding urbanization and environmental changes due to a changing lifestyle. This situation creates a huge opportunity for hepatitis B diagnostic test manufacturers. In addition, a rising awareness due to the initiatives taken by governments and non-profit organizations is likely to fuel the growth of the global hepatitis B diagnostic test market. There is a growing awareness about the need for early detection of hepatitis B infections and this also is likely to fuel the growth of the market. Market penetration of point-of-care tests due to the increasing awareness is also boosting the market growth, especially in developed countries.

The prevalence of acute hepatitis cases is high in North America due to the exposure to blood or body fluids of an infected person, reuse of injections, unscreened blood transfusion or sexual contact with an infected person. According to CDC, the number of reported cases of hepatitis B increased from 0.3% between 2011 and 2012 to 20.7%, i.e. 3,370 cases in 2015. Chronic cases of hepatitis B in the United States were estimated to be 850,000. However, other sources put the figure to be more than 2.2 million.

Diagnosis is the first crucial step for getting the recommended care and treatment for the patients suffering from hepatitis B. Due to such reasons, CDC and the U.S. government have taken initiatives to screen the hepatitis B infection in early stages. CDC and USPSTF have recommended HBV testing for the people travelling to the United States from endemic regions in order to prevent the outbreak of hepatitis B. 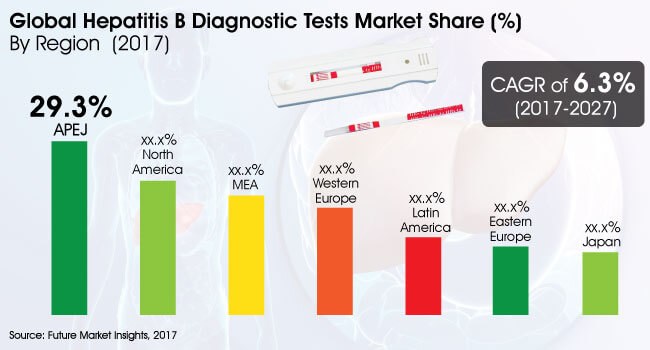