The demand for hydrostatic transmission went through a negative phase amid the spread of the Covid-19 crisis. The sales level in this market witnessed a downturn creating potential losses for the global manufacturers. As the condition is normalizing in 2021 due to strong and stringent government efforts, the top manufacturers are trying to recuperate the losses incurred through product diversifications and innovations. 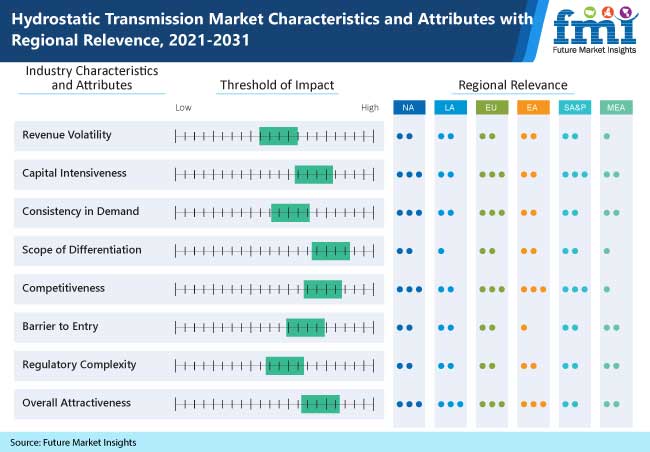 For instance, in March 2021, Eaton Corporation announced the completion of the acquisition of Tripp Lite. With this acquisition, Eaton will be able to expand its power quality business in America.

In addition to this, Eaton announced the launch of its new FT1380e electronic crimper, which is an all-in-one hose assembly crimp machine delivering a new level of precision. The latest launch helps reduce assembly time, operator error, and waste.  This is due to the easy validation and accuracy which is a result of pre-loaded crimp specs and color assembly photos.

Komatsu, a leading heavy equipment company, joined hands and entered into a new mine rehabilitation partnership with Anglo American, a gold mining company, to plant more than 9,000 trees at Anglo American’s Dawson Mine in Central Queensland’s Bowen Basin. The partnership aims at developing the mined land for agricultural use and contributes towards the re-establishment of native plant species using the latest reclamation methods.

In terms of growth, Asia Pacific is projected to hold a dominant share in the global hydrostatic transmission market owing to the increasing agricultural activities and government guidelines on infrastructural activities such as the development of new and improved roads.

The North American region is expected to retain its commanding position throughout the course of the forecast period. All the other key regions are driving the market growth and opening various opportunities for manufacturers.

In terms of value, the global hydrostatic transmission market is likely to witness a CAGR of over 5.9% during the forecast period, representing a promising scenario through the next decade.

Demand for hydrostatic transmission sways with the performance of construction equipment, agricultural equipment, and mining equipment in the forthcoming years.

Industries such agriculture, construction, mining rely on heavy duty machinery for a wide range of applications. These applications require precise movement and high torque at low speed, which are met through the implementation of hydrostatic transmission within the equipment.

Among all the end users, the global hydrostatic transmission market is foreseen to witness maximum traction in the agriculture industry in form of agricultural machinery sales, followed by the logistics and transport sector. Although construction and mining currently accounts for a considerable market value share of over 20%, it will reportedly experience a slight decline against applications in the thriving logistics and transport industry. Other end users include turf equipment and airport ground support equipment.

The market segmentation offered in the report study is mentioned below: