In terms of revenue, the global liquid smoke market is estimated to register a CAGR of 7.8% over the forecast period, owing to numerous factors, about which Future Market Insights offers thorough insights and forecasts in the report. Factors such as rising purchasing power in certain countries in regions such as North America, Western Europe, and Eastern Europe along with growing pet ownership are anticipated to surge the demand for the liquid smoke market during the forecast period.

By application, the meat and seafood segment is expected to witness the highest growth in the global liquid smoke market. Owning to the rapidly increasing population and rampant westernization across developing regions such as APAC, there is rising consumption of meat products worldwide. The meat and seafood segment is expected to reach a value of nearly US$ 118 Mn by 2027 end. By distribution channel, the hypermarket/supermarket segment is estimated to account for a significant revenue share of 55.6% in 2017 and is expected to register a significant growth rate during the forecast period.

Rapidly increasing population and rampant westernization across developing regions such as APAC are leading to rising consumption of meat products. This, in turn, is projected to increase uptake of processed meat products, thus boosting demand for liquid smoke for imparting flavour and preservation.

This, in turn, is anticipated to boost the growth of the pet food and treats segment in the global liquid smoke market. However, certain processed meat manufacturers still prefer the conventional method of smoking meat products, as it imparts a strong flavour to food, especially meat products such as beef and pork. It also gives it a distinct texture. This is expected to inhibit the growth of the liquid smoke market to a certain extent. 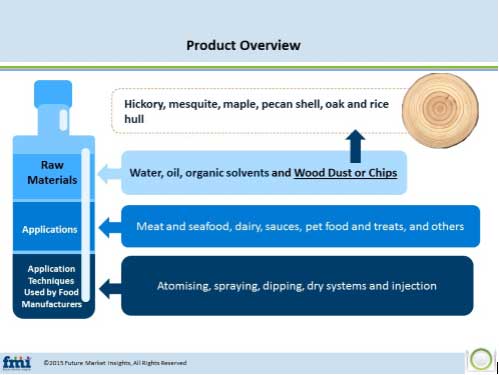 North America market has been estimated to dominate the liquid smoke market, accounting for maximum revenue share of the market by 2017 end. Collectively, North America and Western Europe markets are expected to account for over 41.6% revenue share of the global liquid smoke market by 2017 end. Japan is estimated to exhibit a significant CAGR of 7.5% over the forecast period.