2021 Analysis and Review: Magnesium Oxide Market by Application – Industrial, Refractories, and Agricultural for 2021-2031

The global magnesium oxide industry is quite progressive in nature and anticipated to expand at over 5% CAGR through 2031. Growing application in agriculture, refractories, and other industrial sectors is catering to the growth of suppliers. Furthermore, a flurry of inventions in different types of magnesium oxide such as dead burned magnesia, and fused magnesia by manufacturers is set to further raise the industry value in the near future.

The latest revised edition of the report on ‘magnesium oxide’ market study by Future Market Insights (FMI) offers a thorough analysis of the global industry potential, its key driving & restraining factors, and demand-supply patterns during the forecast period of 2021 to 2031. According to the report, the United States, Germany, China, Japan, and a few other countries will emerge highly lucrative, while overall 20+ countries will maintain positive industry outlooks throughout the forecast period.

Magnesium oxide manufacturers witnessed steady growth in demand over the past years, while growing adoption of dead burned magnesia or DBM magnesia further aided in the surge in demand. Despite facing a few constraints in the on-set of the COVID-19 pandemic, the magnesium oxide industry maintained a positive outlook during the last 5 years from 2016 to 2020.

As the advancements is taking over the refractories, industrial, and agricultural sectors, magnesium oxide providers are expected to come across new opportunities in the coming years. While the increase in focus on developing more quality products will favor the magnesium oxide suppliers, the macro-economic factors such as increase in governmental investment in industrial sectors, rapid urbanization, and others will help them in capturing the low hanging opportunities through 2031.

And others. As stated in a report titled “Agribusiness Industry Spotlight” published by the Select USA, the United States agribusiness gives tough competition in the global domain. As per the report, the agribusiness industry contributed over US$ 159 Billion in export sales to the U.S. economy in 2018, while the Foreign Direct Investment (FDI) in the U.S. agribusiness industry totaled more than US$ 14 Billion. These data give an idea regarding the ample of opportunities awaiting for magnesium oxide suppliers around the globe.

What are the Key Challenges Faced by Magnesium Oxide Manufacturers?

Why is Germany Considered Heavyweight for Magnesium Oxide Suppliers?

Germany has been leading in Europe magnesium oxide industry since the past decade and likely to sustain its position throughout the forecast period. Rapidly evolving manufacturing hubs coupled with the rise in demand from agricultural, refractories, and other industrial sectors are spurring the growth in Germany.

As stated in a report titled “Farming” published by the Federal Ministry of Food and Agriculture, in Germany, half of the national territory is put to agricultural use despite a high population density. According to the report, in Germany, around a million people produce goods worth around 50 Billion Euro a year in nearly 270,000 agricultural enterprises, making its agricultural sector among the four largest producers in the European Union. This explains well why magnesium oxide suppliers are targeting Germany in order to increase their profit margins.

China is the epicenter of the world’s fastest-growing magnesium oxide industry Asia Pacific and expected to dominate over the forecast period. Increase in demand for dead burned magnesia, caustic calcined magnesia, and others in industrial sectors is fuelling the sales in China.

As stated in a report published by the International Trade Administration in February, 2021, China has a highly potential industrial sector which majorly contribute to its economy growth, while in 2019 China was the world’s second-largest economy with a Gross Domestic Product (GDP) of US$ 14 Trillion. As per the report, China’s GDP grew 6.11% in 2019 and is forecast to rise further in the post-pandemic years. This indirectly hints towards the new avenues created for magnesium oxide providers in China.

Will India Remain in the Spotlight for Magnesium Oxide Providers?

India has been in the spotlight for magnesium oxide manufacturers since the past decade owing to its well-developed industries and advanced manufacturing units. With the rise in application in refractories, and other industrial sectors, India is likely to prevail in its position through 2031.

According to a report titled “Agriculture in India” published by the India Brand Equity Foundation (IBEF) on 22nd March, 2021, the Gross Value Added (GVA) by agriculture, forestry, and fishing was estimated at US$ 276.37 Billion in FY20 in India. As stated in the report, the total agricultural export was US$ 10.40 Billion between April and October 2020, which is forecast to grow further in the coming years. No doubt that suppliers are eyeing India in order to increase their sales footprint.

Which is the Preferred Type of Magnesium Oxide?

Presently, dead burned magnesia is leading in the magnesium oxide industry in terms of product type and expected to remain in the position throughout the forecast period. There are several advantages of this product type such as-

And others. As a result, this type of magnesium oxide are bolstering the growth of the suppliers further around the world. 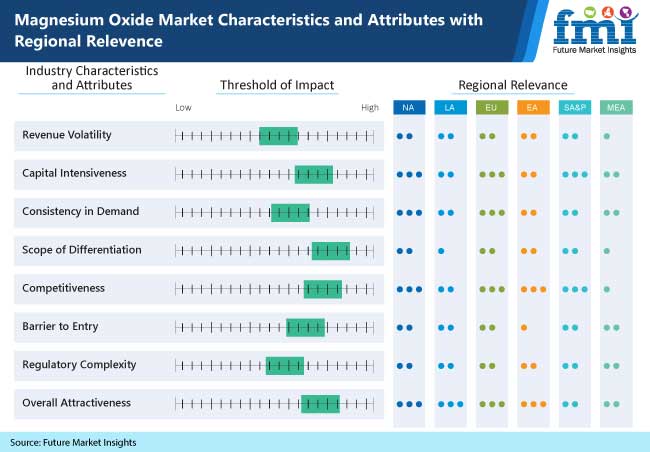 The global magnesium oxide industry is fragmented and flourishing on the key industry players. In order to sail through the strict competition, industry players are launching wider variety of products more frequently.

Some of the key players supplying magnesium oxide are-