2018 Analysis and Review: Magnesium Chloride Market By Grade - Industrial Food and Pharmaceuticals for 2018 - 2028

The magnesium chloride market is anticipated to witness a moderate growth rate with China taking the lead over all the developed regions. The availability of alternatives for deicing application have somehow restricted the usage of magnesium chloride salts across several industrial applications. However, the demand for magnesium chloride in the synthesis of magnesium derivatives and building material which is increasing at a rapid pace is expected to create incremental opportunities for the market players in the coming years. 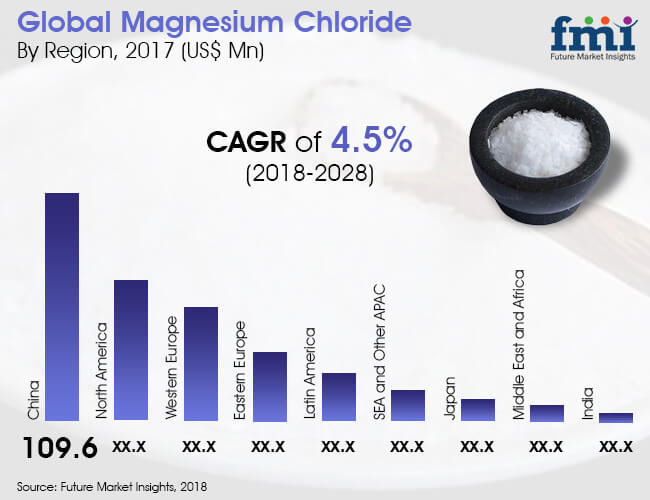 The pressing need to maintain high water quality standards, especially in developed regions such as Western Europe and North America is expected to lead to a rise in the investments in wastewater treatment processes in chemical industries, power plants, and municipal waste treatment centres in the coming years.

Growing population, urbanization, industrial growth, and oil and gas production are among the other driving factors for growing focus on wastewater treatment, globally. According to the American Society of Civil Engineers, the estimated wastewater treatment expenditure in the U.S. is expected to increase to approximately US$ 78 Bn by 2020.

Magnesium chloride is gaining traction across numerous applications in China, especially in the production of magnesium metal and derivatives and in pharmaceutical and personal care applications. Mainly, Flakes and Prills forms are used for the said applications.

With the increase in demand for magnesium chloride in the last few years, various small players have entered the marketplace with a considerable output capacity to cater to the local demand as well as the demand generated from the overseas market. These manufacturers are dedicated towards the production of solid (both flakes and prills) type of magnesium chloride.

On these grounds, China has been taking the lead in the global magnesium chloride market and is expected to retain its leading position in the coming years as well.

The support from the Chinese government is also one of the core factors that is expected to take this market forward in the coming years. In China, the 12th fifth year plan comprises opportunities to support the new materials industry, promote the establishment of large-tonnage advanced magnesium chloride production lines through the leading scientific and technological projects of the country and also promote the industrialization and commercialization of magnesium chloride based products.

Over the past few years, cities and states in the Northern hemisphere have been facing extreme winter weather conditions. Owing to this, regular road maintenance has become a necessity to for addressing the challenges created by these natural factors. Use of magnesium chloride as a deicing agent is gaining traction in North America and European region due to its various beneficial attributes.

Magnesium chloride starts working within 25 minutes of its application in snow-covered roads, which reduces crashes, injuries, and accident cost by over 80%.  As a result of this, the demand for magnesium chloride is expected to rise extensively in both North America and Western Europe.

The global magnesium chloride market has been segmented into: