The report covers comprehensive information about market trends, volume (metric tonnes) and value (US$ Mn) projections, market dynamics, competition, and recent developments in the global magnesium metal market for the study period 2016 to 2026.

The global magnesium metal market is expected to reach a little over US$ 6,271.5 Mn by the end of forecast period, registering a CAGR of 7.1% for the period between 2016 and 2026. Advancements in automobile manufacturing, increasing adoption in aviation capacity, and expansion of crude steel production are some of the factors expected to lay the robust foundation for the growth of the global magnesium metal market.

Growing automotive sales and a corresponding increase in automotive /vehicle parc are expected to result in a significant increase in environmental greenhouse gas emissions. According to EPA, the transportation sector accounted for around 26% of overall greenhouse gas emissions in 2014 in the U.S. Thus, in order to tackle the menace of increasing environmental pollution emanating from the transportation sector, the development of greener technologies and vehicles that are all the more fuel-efficient has emerged as a top priority for automotive industry think tanks and related R&D activities.

Magnesium metal is one of the most versatile metals on earth. It is around 65% lighter than steel and 33% lighter than aluminium. Moreover, the use of magnesium metal for automotive components results in parts that are not only lighter in weight but also relatively more dimensionally stable. Besides, several intricate and thin-walled components can be manufactured with relatively more ease vis-à-vis some of the conventional materials. 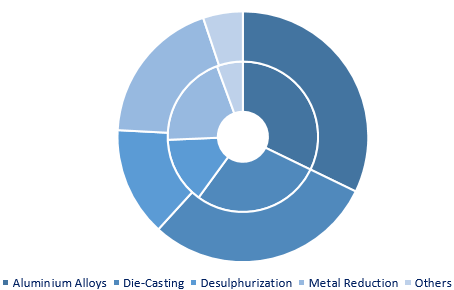