Metallized Film Market: APEJ and Western Europe Estimated to Account for a Combined Value Share of More Than 50% by 2018 End: Global Industry Analysis 2013 - 2017 and Opportunity Assessment 2018 - 2028

According to Future Market Insights’ latest market report titled “Metallized Film Market: Global Industry Analysis 2013 – 2017 and Opportunity Assessment 2018 – 2028”, the increasing usage of packaged food is triggering the growth of metalized barrier film packaging, which is expected to fuel the growth of the global metallized film market during the forecast period. Globally, the revenue generated from the sales of metallized film has been estimated to be around US$ 3,416.0 Mn in 2018 and is projected to increase at a CAGR of 5.1% in terms of value during the forecast period.

Metallized film are polymer films coated with a thin layer of metal, mostly aluminum. They offer barrier properties against moisture, light and oxygen at a reduced cost and weight. Hence, metallized film are widely used for packaging, decorative purposes, laminations, labelling and insulation.

Metallized film offer a wide range of packaging as well as wrapping color options with various barrier and sealing properties. Such properties of metallized film not only offer flexibility in design but also enhance product security and visibility. The glossy and shiny look offered by metallized film enhances the marketing impact of the packaging of products. Also, its high shelf attractiveness, due to its distinct metallic and glossy finish, offers the opportunity to make brands stand out. These factors are expected to escalate the growth of the global metallized film market during the forecast period. 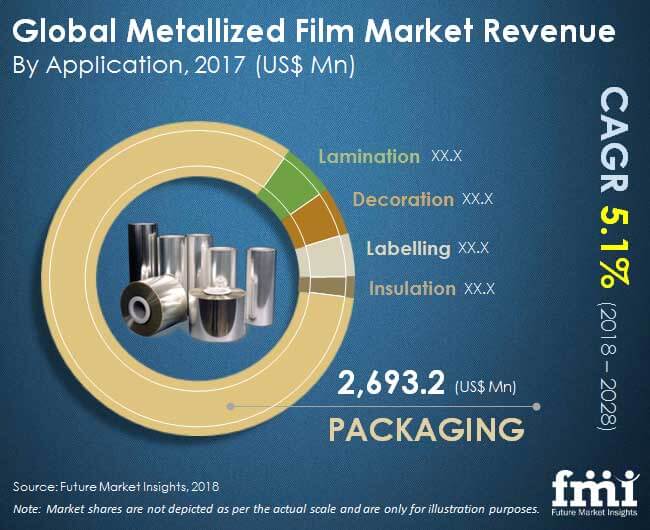 The Volume for the Global Metallized Film Market is Expected to Expand 1.6X over the Forecast Period

Few of the key developments observed among metallized film manufacturers are: