The global neuromorphic chip market is expected to witness a significant surge by the end of 2026. The market will record a CAGR of 20.7% within the forecast period (2016 – 2026). The value of the global neuromorphic chip market crossed US$ 1,420 Mn in 2015 and is expected to touch an approximate value of US$ 10,810 Mn by the end of 2026. The market is likely to showcase an incremental dollar opportunity of more than US$ 9,170 Mn during the period of forecast.

In terms of revenue the North America neuromorphic chip market is projected to be the most attractive region. The North America neuromorphic chip market was valued at more than US$ 400 Mn in 2015 and is expected to surpass the value of US$ 2,700 Mn by the end of 2026. The market will expand at a CAGR of 19.7% in terms of value over the forecast period. This booming regional market is expected to represent an incremental dollar opportunity of more than US$ 2,300 Mn during the period of assessment.

Recent trends in North America include convergence of new and advanced technologies with existing technologies to enhance operations in different verticals such as automobiles and aerospace & defence. Neuromorphic chips, built with hundreds of neurons, are being tested for application in unmanned drones.

A chip that works on a complex pattern matching algorithm is being developed to be able to identify and store the signal patterns emitted from the surroundings of any defined space. Using this information, the chip will enable the drone to recognise the space the next time it is at the same location.

For applications in the automotive industry, with the help of other technologies such as signal processing etc., the chip is expected to help drivers in taking better informed decisions by offering data and information about their immediate surroundings. In the U.S., the government is taking initiatives to promote research and development of advanced technologies, which can replace or enhance existing non-efficient ones. 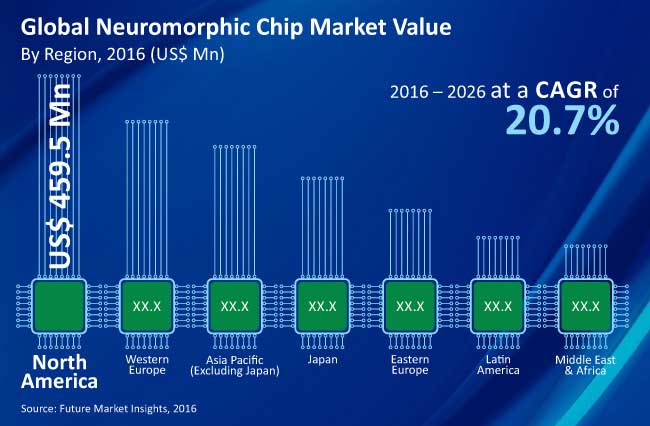