Obesity Management Market: Phentermine and Topiramate Expected to be the Second Most Lucrative Segment by Drug Type: Global Industry Analysis and Opportunity Assessment 2017-2027

Increasing life expectancy and worsening lifestyle to blame for obesity

Lifestyle diseases such as diabetes and other chronic ailments are the main cause of obesity around the world. Improved healthcare and medical facilities have led to an increase in the life expectancy of people, which is the primary reason for the large geriatric population seen in the developed world. Geriatric people are far more prone to conceal sarcopenia i.e. a noticeable rise in body fat with simultaneous loss of muscle mass and functional capability. This makes them the main segment of the global obesity management market in both the short and the long term.

Even though the number of obesity drug users that are on anti-obesity therapeutic drugs are rising every day on account of their enormous benefits, a few studies have demonstrated adverse side effects when these drugs are taken in the long term. The same study also shows diabetes, high cholesterol, heart disease, high blood pressure, sleep apnea, asthma, cancer, depression and strokes to be linked to obesity drugs.

The prevalence of obesity has nearly doubled in the years since 1980. In 2014, more than half a billion people were obese and almost 2 billion adults were overweight i.e. 13% of the global population is obese and 39% are overweight. Nearly 3 million people die every year as a result of being overweight or obese. Obesity accounts for approximately half of Type 2 diabetes cases across the globe. Obesity is the fifth leading factor responsible for death and this affects not only developed nations, but also developing countries.

In the U.S, the obese population was roughly 40% and the overweight population was nearly 70% of the entire population in 2014. Hence, weight loss and obesity management plays an important role to make sure that these chronic disease like diabetes, high blood pressure, high cholesterol, heart disease can be controlled to lead a healthy life.  All these factors should spur the growth of the global obesity management market during the course of the forecast period.

While Orlistat dominates the global obesity management market by drug type at present with an estimated market value of more than US$ 200 Mn in 2017, it is poised to record the lowest CAGR of only 1.5% during the decade 2017-2027. On the other hand, Bupropion and Naltrexone is predicted to grow at a massive 8.3% CAGR for the decade, pushing it to a market value of nearly US$ 109 Mn by 2027, as opposed to just under US$ 46 Mn in 2016. An absolute dollar opportunity of roughly US$ 3.6 Mn can be reasonably expected in the Bupropion and Naltrexone segment of the global obesity management market in 2018 over the previous year. 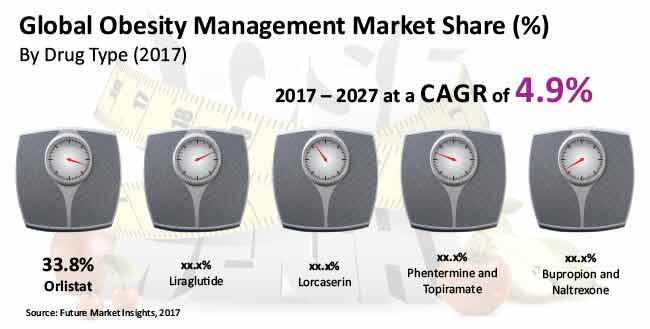 By Treatment Type
By Distribution Channel
By Region