Extensive Usage of Sodium Chloride as Prime Solution in Hemodialysis

Over the last few years, changing lifestyles and food habits in developing as well as developed regions have resulted in several lifestyle diseases such as cardiovascular diseases, chronic or late stage chronic kidney diseases, and diarrhoea, among others. In developed countries such as the U.S. and EU-5, exposure to these diseases is high and leads to increase in healthcare expenditure.

End-stage renal disease (ESRD) patients are treated through kidney transplantation or using the method of dialysis. However, due to the unavailability of kidney donors and multiple other medical shortcomings, the rate of kidney transplants is quite low in comparison to the widely practised method of dialysis. Thus, most of the ESRD patients are treated through dialysis. Among dialysis types, around 90% of the patients preferred hemodialysis, while the rest preferred peritoneal dialysis.

According to The National Kidney Foundation, in 2014, over 1 lac ESRD patients registered for transplantation for which, only 17,105 kidneys donors were available in the U.S.

Sodium chloride or Industrial Sodium Chloride is a basic chemical with applications ranging among end-use industries such as medication, cosmetics, dietetic food, and cosmetic products. In the pharmaceutical industry, sodium chloride is used in the manufacturing of several products such as dialysis & infusion solutions, oral rehydration salts, and injection and saline drips.

Increasing healthcare expenditure and significant growth of the pharmaceutical industry, primarily in developed regions, are expected to collectively drive the demand for pharmaceutical grade sodium chloride over the forecast period.

Oral drug delivery has yielded superior results for manufacturers and end-users as a route of drug administration, due to high patient compliance, cost-effectiveness, lower sterility, constraints, flexibility in the design of dosage form, and ease of production.

Demand for matrix tablets is an important aspect for controlled and sustained release excipient and dosage forms. Pharmaceutical grade sodium chloride is used extensively for manufacturing such matrix tablets.

Constant rise in stress and lifestyle-related diseases will drive the need for innovation and research, bringing novel drug delivery systems to the pharmaceutical grade sodium chloride market. This will, in turn, drive the need for innovative drug formulations. With increasing awareness of health insurance and better availability and affordability of drugs, the pharma industry is en-route exponential growth owing to which, pharmaceutical grade sodium chloride demand is anticipated to increase over the coming years. 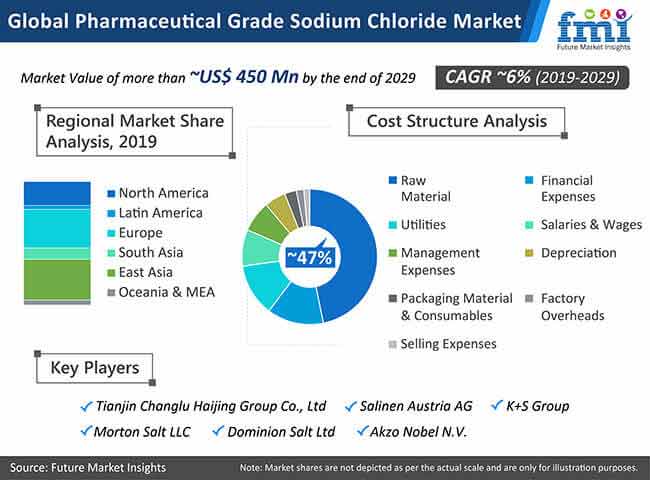