Kidney diseases are one of the leading causes of death worldwide. The incidence of chronic kidney diseases is rapidly rising especially in the elderly population due to increase in life expectancy of general population and improvements in medical management services. However, diabetes and hypertension remain the leading cause of renal diseases. Biomarkers are measurable indicators reflecting physiological and pharmacological progression of disease state. Recent advances in molecular biology have resulted in the development of novel biomarkers for the renal function. Extensive R&D by biomarker manufacturers has led to identification of novel renal biomarkers to deliver better diagnostic accuracy and improve patient outcomes.

Growth of the global renal biomarker market is mainly driven by rising prevalence of various renal diseases coupled with an ageing population worldwide. Also, there has been an increase in the adult population with chronic kidney diseases, primarily attributed to a rising prevalence of conditions such as diabetes and high blood pressure. Other prominent growth factors include large number of clinical trials in the novel renal biomarker and drug development space and penetration of various cost-effective, reliable, and rapid technologically driven diagnostic protocols in clinical practice.

However, use of unreliable imperfect gold standard for renal disease diagnosis and lack of sensitivity and specificity in current renal biomarkers are some of the factors restraining the growth of the market over the forecast period.

The Functional Biomarker segment is anticipated to account for a market value share of 52.3% by the end of 2016 and is expected to retain its dominance throughout the forecast period. The Up-Regulated Proteins segment is estimated to account for 33.8% market share in terms of value by 2016 end.

The Enzyme Linked Immunosorbent Assay segment is anticipated to register a CAGR of 8.1% over the forecast period and is expected to register high Y-o-Y growth rates from 2016 to 2026. The Particle-Enhanced Turbidimetric Immunoassay segment is estimated to be the second largest segment in terms of value, holding a market value share of 21.0% by 2016 end. 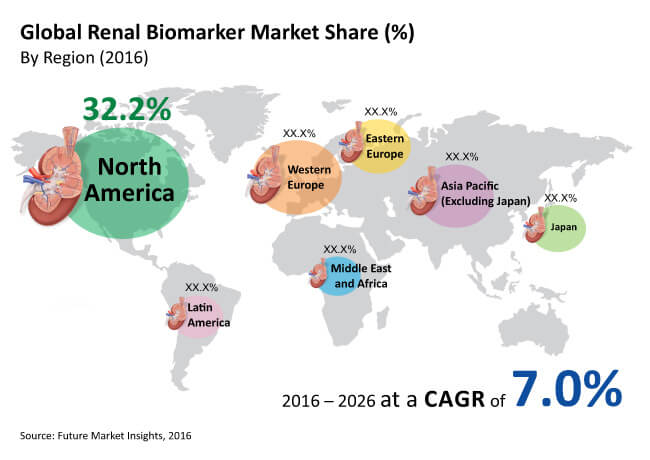