The term biomarker refers to a human’s body molecule - obtained from blood, body fluids, or tissue - that can be studied to assess the health of the person. Testing a human for existing diseases through biomarkers and assessing molecular signs of health is called biomarker testing.

PD-L1, a protein whose presence indicates a tumor, emerged as an early biomarker to be tested in immunotherapy clinical trials.

Contrary to conventional standards, the ability to assess each individual distinctively, solely based on the levels of PD-L1 protein, makes it one of the most reliable tests available in the industry currently.

Moreover, it finds application in the cancer treatment process, tracking the growth of cancer, and measuring the progress of the treatment. Over the years, biomarker testing has become an integral part of the diagnosis and treatment process of non-small lung cancer, gaining the trust of medical professions and patients alike.

As the incidence of different types of malignant cancers continues to rise year-on-year, there is a persistent demand for effective diagnostic solutions. This is expected to remain the principal driving factor for the adoption of PD-L1 biomarker testing.

Similarly, according to the World Health Organization (WHO), lung cancer is the most prevalent cancer, causing nearly 2 Mn deaths in 2018. In the US, the number of deaths due to lung cancer peaked in 2005 with 159,292 deaths. In 2020, as of now, over 228,820 new cases and 135,720 new cases have been registered, according to the statistics of the American Cancer Society.

Developed economies such as the US are focusing on reducing the deaths through early screenings and awareness programs, thus necessitating effectual testing methodologies.

The US Centers for Diseases Control and Prevention (CDC) linked over 80% of lung cancer cases to smoking. Owing to the increasing number of smokers every year, the number of lung cancer patients is anticipated to remain high worldwide.

On the other hand, medical professionals in India have opposed the connection between smoking and lung cancer, citing the 30% to 40% increase in incidence among non-smokers.

On the back of these facets, the number of lung cancer cases is expected to prevail worldwide, consequentially increasing the need for PD-L1 biomarker testing is poised to remain high through the forecast period.

PD-L1 biomarker testing has significantly improved early-stage detection rates and has received support from healthcare institutions for wide-scale usage. Over 15 different types of biomarker-based targeted therapies for lung cancer patients with adenocarcinoma are approved by the US Food and Drug Administration (FDA).

In a similar vein, several drugs are prescribed by professionals solely based on the levels of PD-L1 in the patient’s body. As a result, PD-L1 biomarker testing has established itself as the first preference as a predictive biomarker.

Being one of the very few biomarkers approved for testing, PD-L1 biomarker testing is relatively easier to conduct and consumes less time to read and comprehend the results. On this premise, biomarkers have become a reliable source of testing among individuals and laboratories, thus driving the market on a positive growth trajectory through the forecast period

Precision Remains a Subject of Debate

A few studies and claims have challenged the precision and efficiency of PD L1 biomarker test. According to a report published in the Journal for ImmunoTherapy of Cancer, although PD-L1 received approval for testing 15 types of tumors, PD-L1 has been successful in predicting only 28.9% of these cases.

Another study related to the performance of testing using immunohistochemistry found it inefficient, questioning the standards used in the process to measure the positivity of the disease.

The study further found that there is no consensus on the relevance of patterns of expression such as immune infiltrating lymphocytes, membranous vs cytoplasmic, shedding light on the cracks of the process.

Although medical professionals have cited differing characteristics of biomarkers as the cause for fluctuating results, this is expected to limit the adoption of PD-L1 biomarker testing to an extent.

North America - led by the US - is projected to remain the largest market for PD-L1 biomarker testing market, capturing nearly half of the global market value. The region's dominance is majorly attributed to the high prevalence of lung cancer, coupled with the presence of advanced medical infrastructure in the region.

Similarly, lung cancer has remained one of the major causes of death in the nation for years and will continue to steer the adoption of the PD-L1 biomarker testing for the years to come.

Europe will prevail as the second most lucrative region through the assessment period and will account for more than 1/3rd of market value by the end of 2030. Akin to the North American region, the growth of PD-L1 biomarker testing industry in Europe is attributed to the high incidence of lung cancer in the region. Europe is also home to a large oncology drug market.

Lung cancer is the leading cause of cancer-related deaths in Europe, having claimed more than 380,000 lives in 2018, representing 1 in every 5 cancer deaths. With the diagnosis of 470,000 cases in 2018, Europe accounts for nearly 23% of the total number of cancer cases. 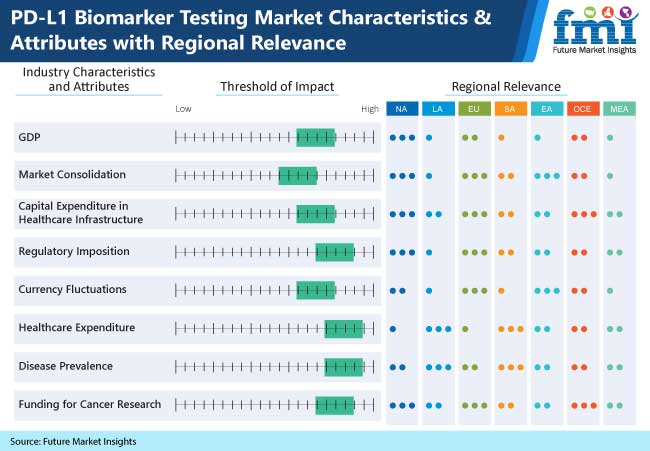 Moreover, healthcare bodies in the region are working on raising awareness among patients regarding the availability of biomarkers. In 2018, the European Cancer Patient Coalition (ECPC) launched an educational video animation on biomarkers, along with an infographic and dedicated webpage to increase awareness regarding the testing.

In the same year, ECPC collaborated with Cancer Drug Development Forum (CDDF)  to organize a workshop on biomarkers and patients’ access to personalized oncology drugs in Europe. Such initiatives will continue to propel the adoption of biomarkers in the region.

Although relatively lower in value as compared to North America and Europe, East Asia will remain a prominent region through the forecast period, growing in value at a healthy pace. The lung cancer diagnostic market in itself is quite expansive, and use of PD-L1 biomarker testing is a component of it.

In 2015, approximately 733,000 new lung cancer cases and 610,000 deaths, representing 21.7% of total cancer mortality were registered in China. Similarly, the number of lung cancer cases grew exponentially in Japan in the last few decades.

On the back of the soaring incidence of lung cancer, the demand for biomarkers will persist in the forthcoming years.

By product type, PD-L1 SP142 assay kits are expected to remain the most sought out product, capturing nearly 50% of global value. High preference for these kits is ascribed to its robustness and efficiency in detecting tumors at a very early stage.

Likewise, PD-L1 SP263 assay kits are gradually gaining prominence in the detection of lung cancer and the segment is poised to grow in value in the forthcoming years.

Non-small cell lung cancer and melanoma are expected to collectively account for over half of the global market value, with the former holding the lion's share. This is primarily attributed to the surging prevalence of these diseases across the world and the subsequent demand for accurate diagnostic methods.

On the basis of end-use, hospitals are expected to drive the majority of revenue, accounting for more than 3/5th of sales. Hospitals are poised to remain the most preferred healthcare institution among consumers owing to the availability of advanced tools and infrastructure.

On the research and development front, PD-L1 biomarker testing product manufacturers are focusing on enhancing the accuracy and accessibility of testing. Besides, they are working on reducing operational expenses to ensure their products remain cost-effective.

On the strategic front, players are adopting organic strategies such as partnerships and acquisitions to expand their brand visibility. On these lines, in January 2019, Abcam Plc acquired Calico Biolabs with an objective to expand its custom monoclonal production service capabilities. Similarly, in December 2018, NeoGenomics, Inc. acquired Genoptix, Inc. to improve its oncology diagnostic services.