The renal function test market has been one of the most intensely competitive markets in the healthcare segments since the past few years. This is since technology dissemination has enabled new and emerging players to enter the market and significantly add to the market fragmentation.

This trend has continued through the Covid-19 pandemic and is expected to be a defining feature of the market in the years to come as well. While the market has witnessed significant shifts due to pandemic, it is notable that several enduring patterns for the market continue. This also makes the renal function test market one of the unique markets in the healthcare sector.

Unlike most sub markers in the healthcare sector, the renal function test market has not seen widespread expansion among younger populations and remains a market that is focussed on geriatric populations. This also means that the market has seen limited post-pandemic expansion in developing countries that have younger populations. This makes the market a significant outlier in the healthcare sector.

However, the market has faced a significant impact in terms of supply chain modifications and an increase in number of players in developing countries. Besides this, the market has also benefited from the increasing emphasis on public healthcare in most major economies across the globe.

In terms of market fragmentation, the North American and European regional segments were areas where intense competition existed. However, with healthcare equipment production capabilities in developing countries picking up significantly, this situation is expected to be replicated in regions such as South Asia, South East Asia and Latin America as well.

However, the absolute growth rate of the market provides ample opportunity for several manufacturers to coexists and continue being profitable as the world’s ageing population increases and geriatric healthcare expenditure continues on an upward trajectory.

Kidneys are one of the most vital organs in the human body, and act as blood filters by reabsorbing essential elements and discarding water-soluble waste products. The renal function tests are used for diagnosing any defect in functions of kidney.

Symptoms that indicate kidney-related problems include blood in urine, high blood pressure, frequent urges to urinate, swelling in hands & feet on the back of fluid build-up in the body, and difficulty in urination. Some commonly used products in renal function tests include dipsticks, reagents, and disposables. 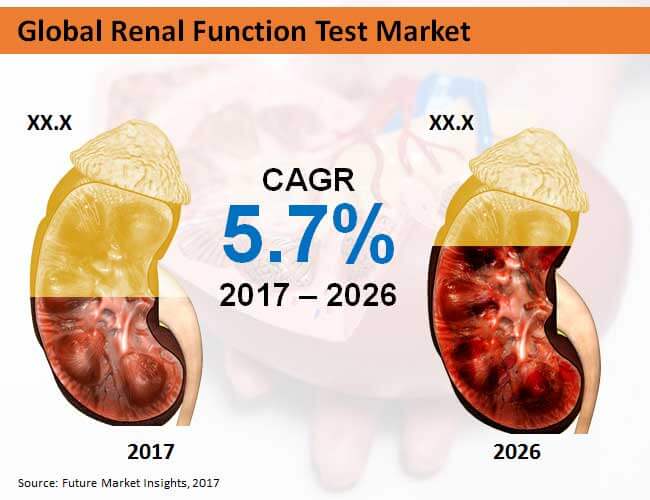 Prevalence of chronic kidney disease is witnessing a surge globally on the back of unhealthy lifestyle of people. This has prompted clinicians in using renal function tests in order to diagnose various kidney-related diseases. Technological advancements in the renal function tests has provided early disease identification, and diagnosis of specific conditions.

Some of these advancements include computer-assisted interpretation, usage of automated analyzers, and advanced parameter estimation, which have offered numerous benefits such as efficient parameter monitoring, automatic variable adjustment, enabling real-time automation, and greater process control. These tools also deliver analysis of a wide variety of samples, providing rapid results, thereby reflecting their potential applications in emergency wards, outpatient clinics and hospitals in the foreseeable future.

Private and public healthcare organizations are increasingly taking initiatives and providing recommendations, in a bid to attain efficient management of chronic kidney disease. For example – the CDC has launched the Chronic Kidney Disease (CKD) Initiative, which is dedicated to developing exhaustive public strategies and promoting awareness for curbing down the incidences of CKD. Initiatives such as this encourage clinicians in using early diagnostic procedures such as renal function test, which in turn influences expansion of the market.

According to a recently compiled report of Future Market Insights (FMI), the global market for renal function test will ride on a steady CAGR through the forecast period (2017-2026). Over US$ 900 Mn revenues are estimated to be amassed from worldwide usage of renal function tests by 2026-end.

This mainly because of robust outsourcing of contracts by leading market players to organizations in APEJ countries, such as China and India. In addition, gradual rise in investment for research & development activities by the region’s market players, and potential untapped opportunities will drive the market expansion in APEJ in the near future.